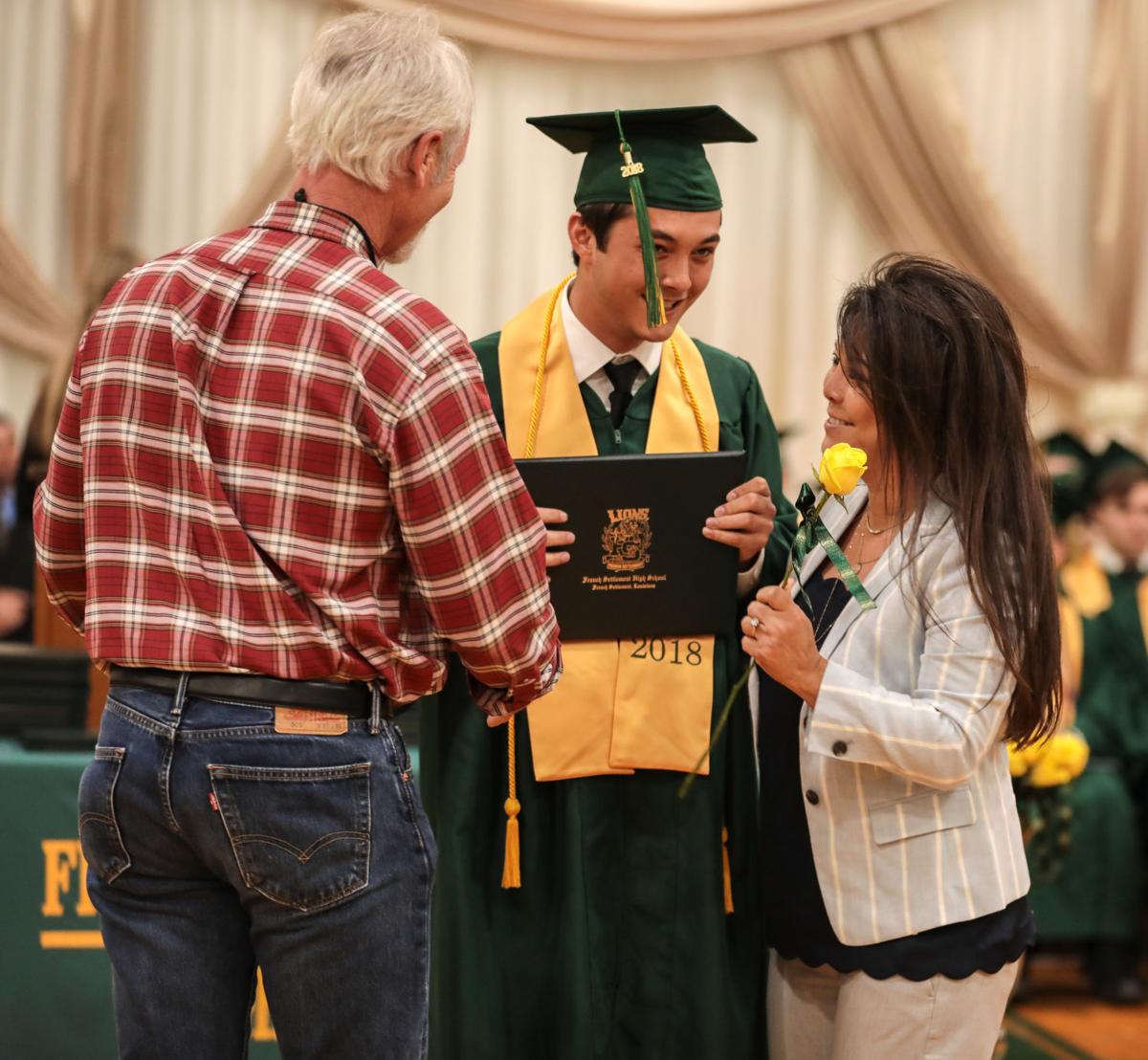 Senior Laine Hardy greets his parents after receiving his diploma during French Settlement High's graduation ceremony at Gerald Keller Gym on Friday, May 18. 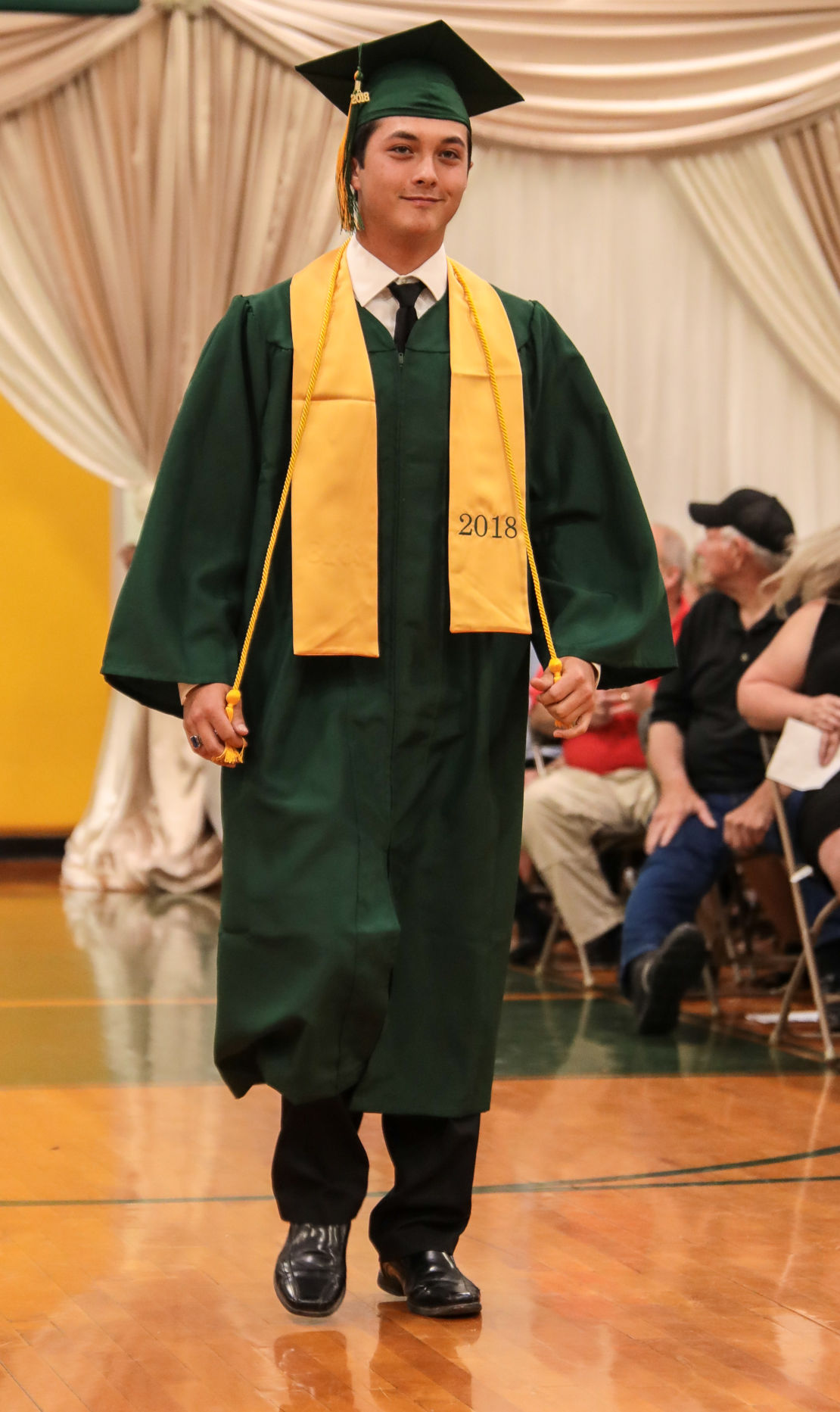 Former American Idol contestant and French Settlement High senior Laine Hardy sings the national anthem alongside classmate Celeste Aime at the start of the school's commencement ceremony on Friday, May 18.

FRENCH SETTLEMENT -- Once again, all eyes were on Laine Hardy.

Only this time, people weren’t there to watch the 17-year-old singer perform.

His name boomed through the speakers: “Laine Reed Hardy.” The 600 or so people gathered in Gerald C. Keller Gym broke out in applause, with a few loud shouts coming from some of Hardy’s family members in the bleachers.

Like the other 68 French Settlement High School seniors, Hardy met Principal Lee Hawkins in front of the podium to receive his diploma. And like his fellow graduates, he then greeted his parents at half-court with a yellow rose before posing for a picture, flashing the same shy, country-boy smirk that has been plastered on televisions, in newspapers and across social media since his run on Season 16 of American Idol.

And graduating from high school may not have even been the best part of his day.

Hardy, the former American Idol contestant who became a local celebrity overnight, capped off a memorable senior year when he and the rest of the FSHS Class of 2018 received their diplomas during the school’s commencement ceremony on Friday, May 18.

That same day, Hardy officially announced the release of his first three singles, which he recorded a month ago in Nashville under country music singer/producer Jamie O’Neal. All three are now available on iTunes.

Two of the songs, “Louisiana Lady” and “In the Bayou,” are originals written by Hardy himself. The third is a familiar tune — a cover of “Hurricane” by Band of Heathens, the same song that put Hardy on the American Idol map, garnered him thousands of fans and set him on a path to the country music world.

But ask him, and he’ll say he’s still the same shy, quiet Laine — albeit a more confident one.

Hardy has been plenty busy since he was eliminated from American Idol in early April, embarking on a country music career while also trying to make sure he graduated. He’s been active on social media, populating his feed with videos of him singing covers or original songs.

And despite his Hardy’s American Idol journey ending before the Top 24, his celebrity has continued to rise.

When Hardy first started appearing on Idol promos in early March, his official Facebook page had roughly 4,300 followers. As of Friday, that number has ballooned to 72,539 followers, who are all quick to like, share and comment on anything the page posts.

Since February, Hardy’s Facebook videos have amassed more than 1,963,100 views, with some exceeding 100,000. One video of Hardy singing Elvis Presley’s “Blue Suede Shoes” drew 237,000 views, while one of him and cousin Trent Thibodaux performing Creedence Clearwater’s “Have You Ever Seen the Rain” in the woods got another 137,000 views.

One video of Hardy singing “Hurricane” — the song he performed in his American Idol audition — attracted a whopping 303,000 views, but none of those come close to his most-viewed video: a cover of LANCO’s “Greatest Love Story.”

Hardy has even drawn a larger fan base than other American Idol contestants who advanced further in the competition: As of Friday, Hardy had more Facebook followers than all but one of Idol’s top 10 contestants, including two of the show’s three finalists.

His fan base extends to Instagram as well, where he has nearly 90,000 followers.

With a growing legion of fans, Hardy’s schedule is now booked with concerts, gigs and radio spots.

A day after graduating, he’ll take the stage at the “Bulls, Bands, and Barrels” show with Clay Walker and Parish County Line at the Lamar Dixon Expo Center. On June 9, he’ll perform in downtown Nashville at the CMA 2018 Festival, followed by a performance at the “Rock N The Bayou” at Lamar Dixon a week later.

In between, his weekends are full with gigs at restaurants and private parties.

“He’s so busy right now,” his mother Cindy Hardy said before his graduation.

This head-first dive into the country music scene isn’t close to what Hardy envisioned for himself when his senior year began in August, two months before he blew away American Idol judges Lionel Richie, Katy Perry and Luke Bryan with his deep, raspy voice.

“When I started my senior year, I just played locally and sang to have fun,” Hardy said. “I didn’t have plans to go to college. I was just gonna work my butt off in the sun with a normal job.

“Then I got on American Idol, and my whole life changed.”

At school, he went from being another face in the crowd to someone everyone knows. In the past two months, he’s done more interviews than he can remember, taken more photos than he can count and signed who knows how many autographs.

Through it all, he’s tried his best to stay humble, the way the “born and bred” Livingston Parish native said he was raised.

But Hardy hasn’t been completely unchanged from the star turn his life has taken.

He’s no longer the painfully shy boy his mother said “wouldn’t even ask for ketchup when we’d go out to eat.” He speaks and sings with more confidence now, having gone from performing in front of just family to performing on a stage in front of millions.

FSHS Principal Lee Hawkins, who described Hardy as “the same nice kid from the day I started,” offered up his own theory for his former pupil’s newfound confidence.

“I guess whenever they take pictures of you playing the guitar with 20 girls standing around you who are also gonna be in your music video, that tends to bring you a little confidence,” Hawkins said with a laugh.

“We’re all excited to see where he goes from here.”

MORNING UPDATE | Livingston Parish headlines from the weekend of May 18-20, 2018

Check out these Livingston Parish headlines from the weekend of May 18-20, 2018!

When Laine Hardy left for Hollywood, he made sure to pack his hunting boots.

Thanks for sharing this post..> whereas the mistaken type could make us really feel inferior and typically even powerless. And in contrast to most different types of stimulants that may alter notion, music looks like a greater various, contemplating that we simply have to take heed to it.