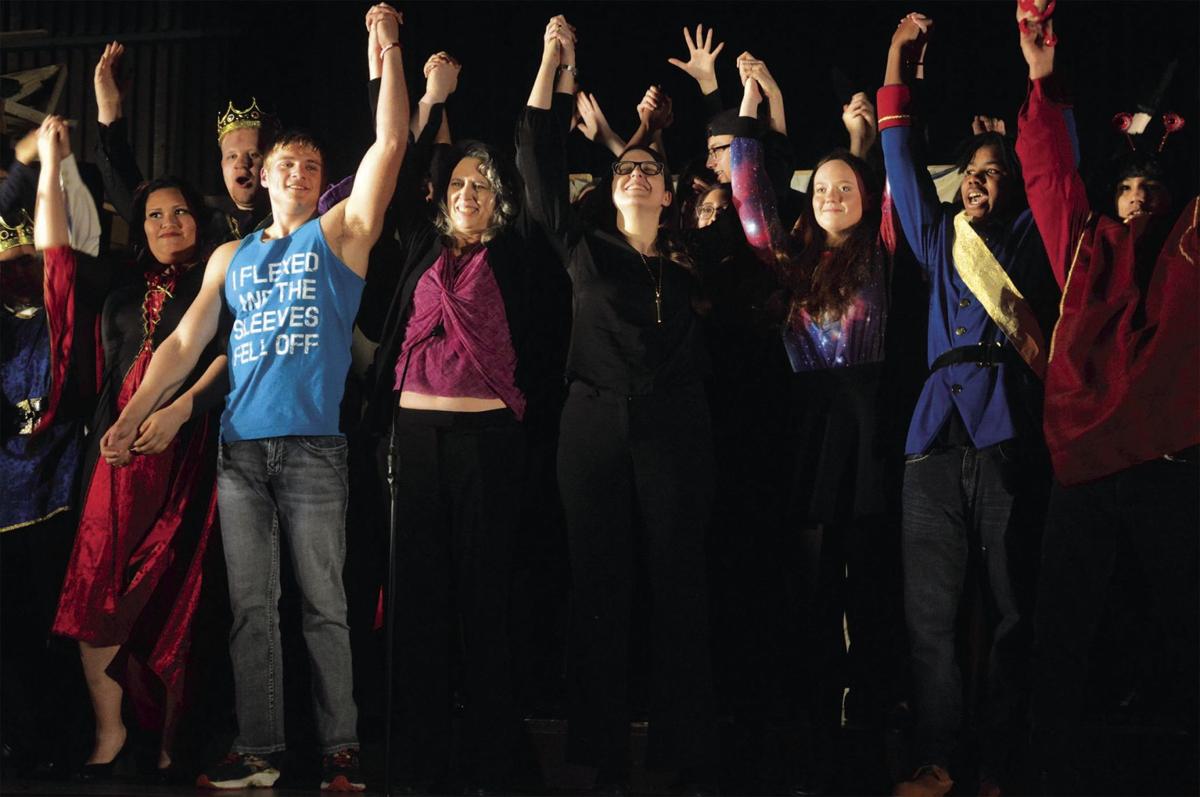 The cast from one of Denham Springs High School’s productions of “The Brothers Grimm Spectaculathon” takes a bow following a show this weekend. 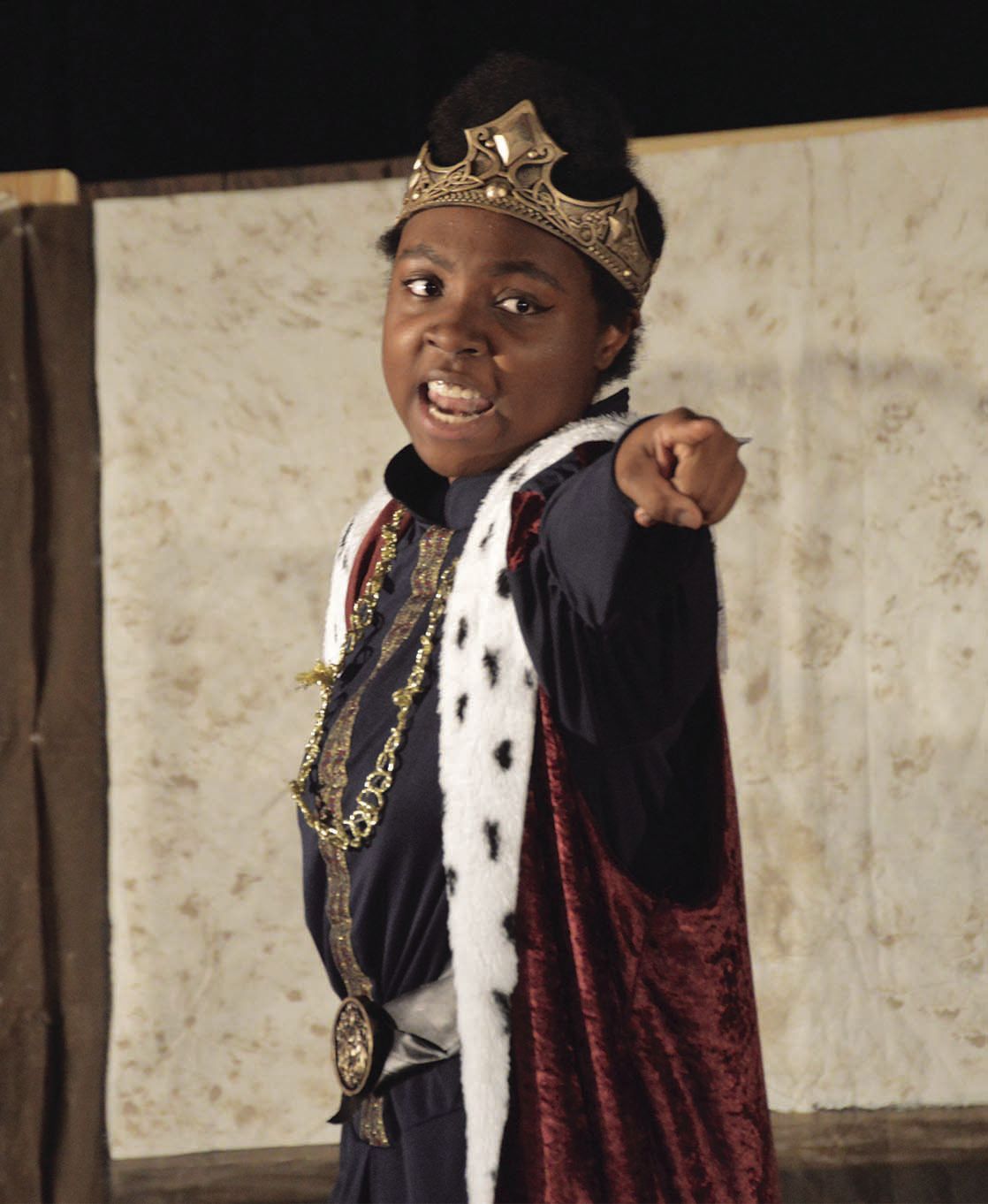 A’Mya Heggins, playing the King, points at a peson in the audience during one of Denham Springs High School’s production of the “The Brothers Grimm Spectaculathon” this weekend. 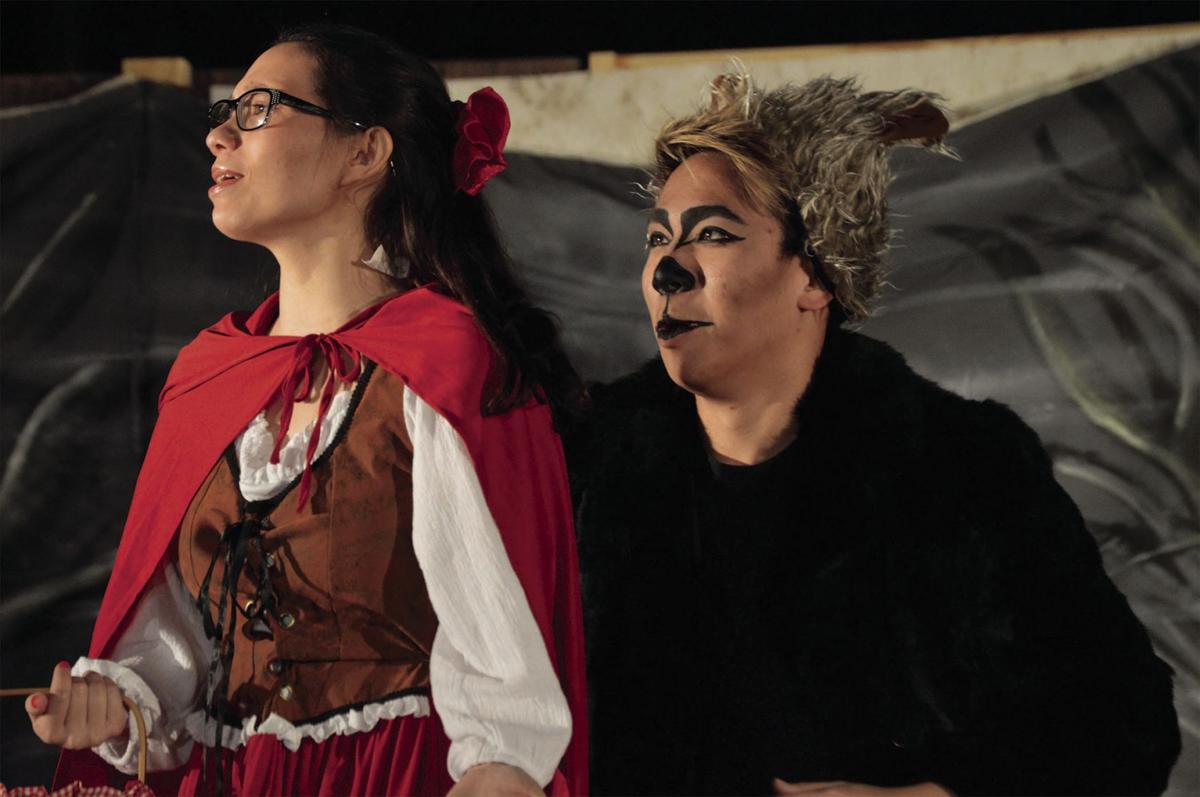 Amber Nguyen, playing the role of Little Red Riding Hood, looks away while the Wolf, played by Jason Nguyen, creeps up behind her. 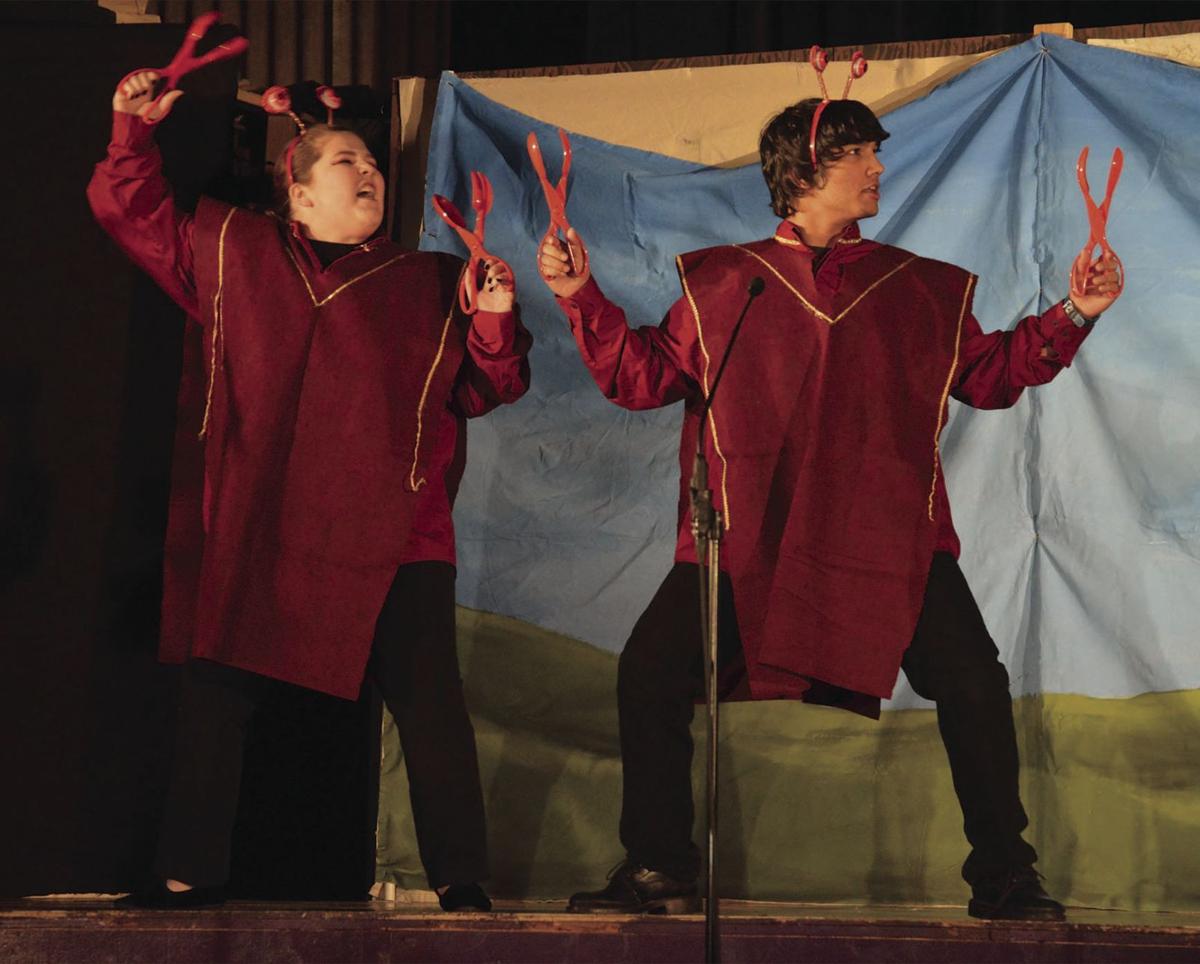 From left, Kaylyn Davis and Tristan Oudit, playing Crab People, come on stage during one of Denham Springs High School’s production of “The Brothers Grimm Spectaculathon” this weekend.

After months of repeating the same lines, telling the same jokes, and speaking in the same accents, Peoples and the rest of Denham Springs High School’s first-ever theatre department had heard it all.

At this point, they were ready to do their stuff in front of a live audience.

To Peoples, nothing can top it.

“When you hear the audience laughing, you know that what you’re doing is good,” said Peoples, a senior. “It makes you want to say your next line even better.”

There were plenty of laughs to go around this weekend, when nearly 150 students in the DSHS theatre department delighted audiences with four showings of Don Zolidis’ “The Brothers Grimm Spectaculathon,” the department’s debut stage production.

The students were under the direction of teachers Michelle Freneaux Chassaing and Donna Van Oss. Chassaing teaches the backstage and technical side of theatre while Van Oss focuses on the acting.

The play was originally scheduled to take place the weekend of Jan. 26-28 but was pushed back following the recent ice storm across south Louisiana and subsequent week-long closure of all Livingston Parish Public Schools Jan. 16-19.

But the delay made the show — something students started preparing for last semester — all the more gratifying once it finally arrived.

“This was such a special moment,” an emotional Peoples said after one of the performances this weekend. “We started this year with nothing but our talent. No money, nothing. We just had our talent and the experience of Mrs. Van Oss and Mrs. Chassaing, and we just did that.

“I’ve never done anything like this, and I probably never will again. I’ll cherish this moment for the rest of my life.”

From Friday night through Sunday night, laughs filled Jacket Gym as students acted out “The Brothers Grimm Spectaculathon,” a play in which two narrators attempt to recreate all 209 of the fairy tales of the Brothers Grimm in a dizzying, fast-paced extravaganza.

Given a modern twist, the fairy tales are all tied together and told in reverse order, beginning with Rapunzel’s mother and ending with Cinderella.

In between, well-known fairy tales such as Rumpelstiltskin, The Frog Prince, Snow White, and Little Red Riding Hood are told alongside more obscure ones such as The Girl Without Hands and The Devil's Grandmother.

There were vegan wolves, cross-dressing dwarves, a game show, audience participation, lightsaber duels, a Bassmaster Classic, and many a “once upon a time.”

For the students, it was chance for others to share in the laughs they’ve had all year.

“Ever since I joined the class, from Day 1, it’s been a blast,” said junior A’Mya Heggins, who played three different roles. “Even from just introducing ourselves, everyday has been something different.”

Because of such enthusiasm surrounding the new theatre department — 160 students signed up at the beginning of the year — the directors divided the play into four shows, with Chassaing and Van Oss’ third and fourth hour classes performing two shows apiece.

The students did their part to make the production feel real as possible, transforming Jacket Gym — a venue normally reserved for athletics — into a makeshift theatre.

A gray tarp covered the gym floor, eliminating the distracting sounds of sliding chairs and squeaky shoes. Speaking of chairs, there were hundreds of them, and nearly all were filled during the weekend’s four shows.

Four sets of four-beam stage lights shined on stage, capturing the students’ every move, while three microphones directly in front captured every sound. On a raised platform in the back of the gym stood two spotlights, under the control of operators Russell Brown, Richard McDonough, Morgan Lambert and Jenifer Soto.

The play included nearly a dozen set pieces — all built and designed by Chassaing and her students — and half as many curtain backdrops.

A lot of work went into the production, a product of so many people who grew close through the entire process, said senior Grace Stevens.

“There are so many people in our theatre class with such a different variety of skills,” she said. “There are seniors, juniors, sophomores — so many people you never felt like you’d come in contact with. This just brought us all together.

“If this is what this is now, I can’t wait to see it next year and in the years to come.”

Check out these Livingston Parish headlines from February 5, 2018!