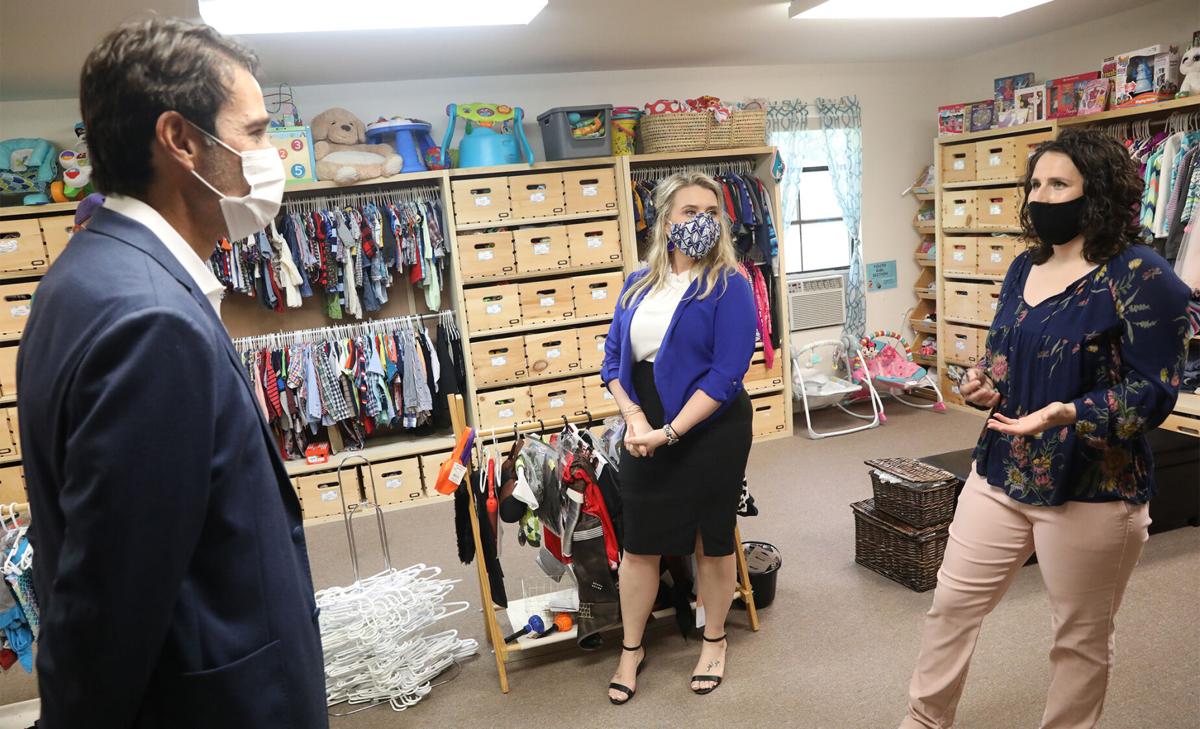 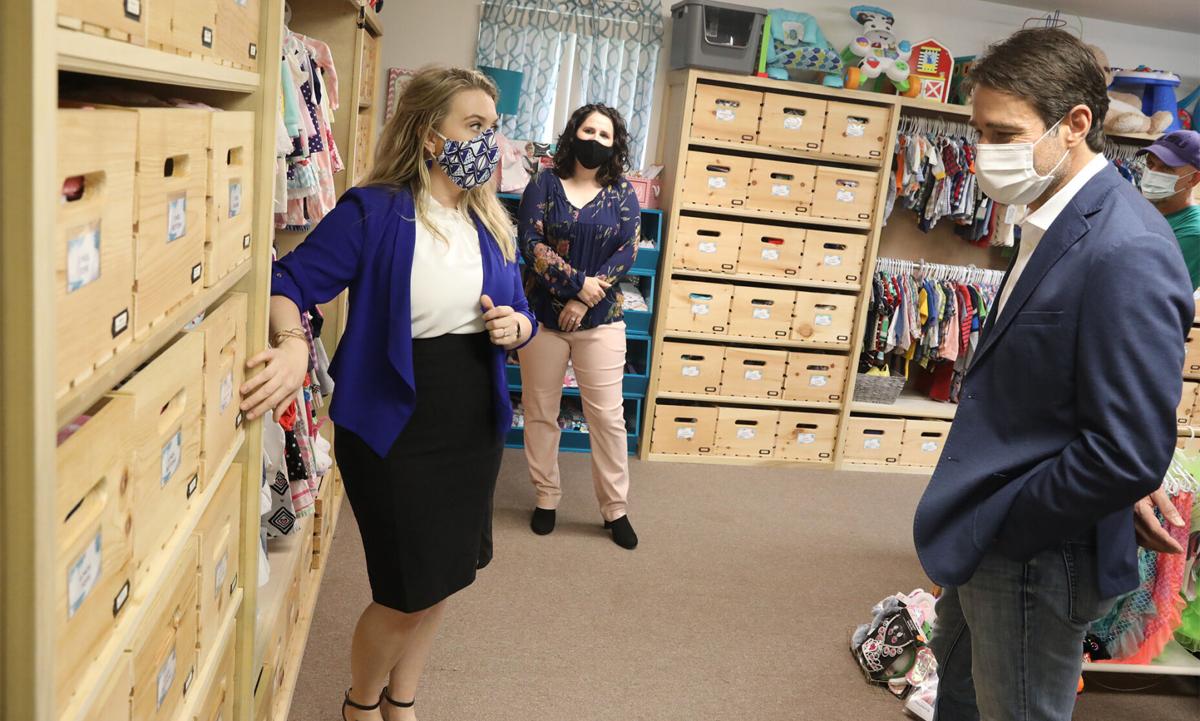 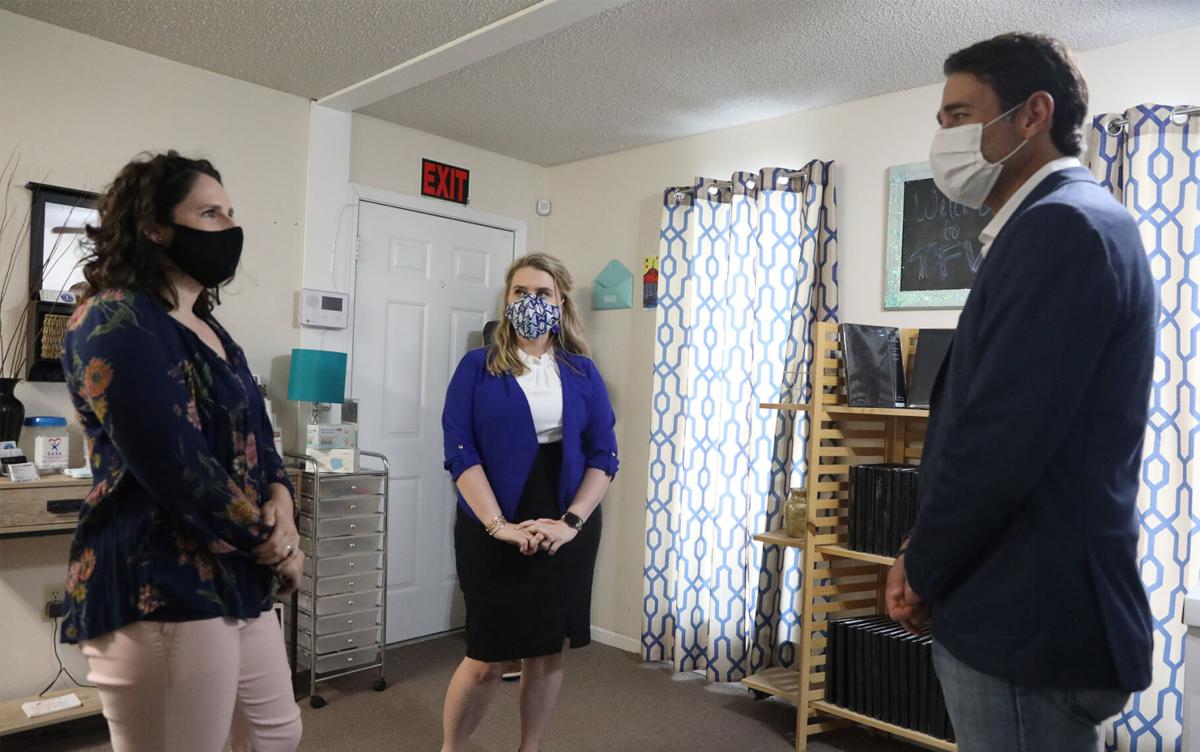 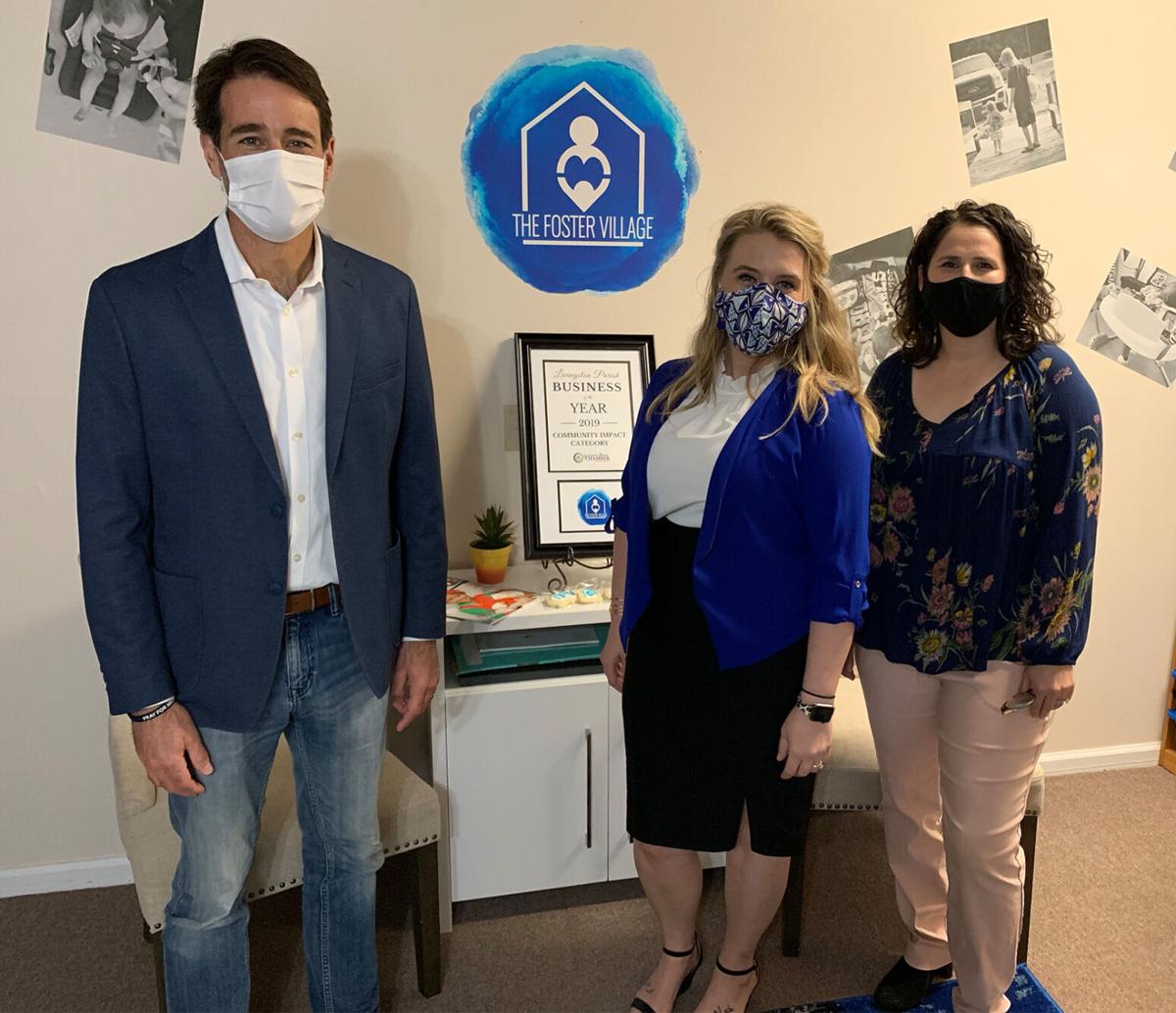 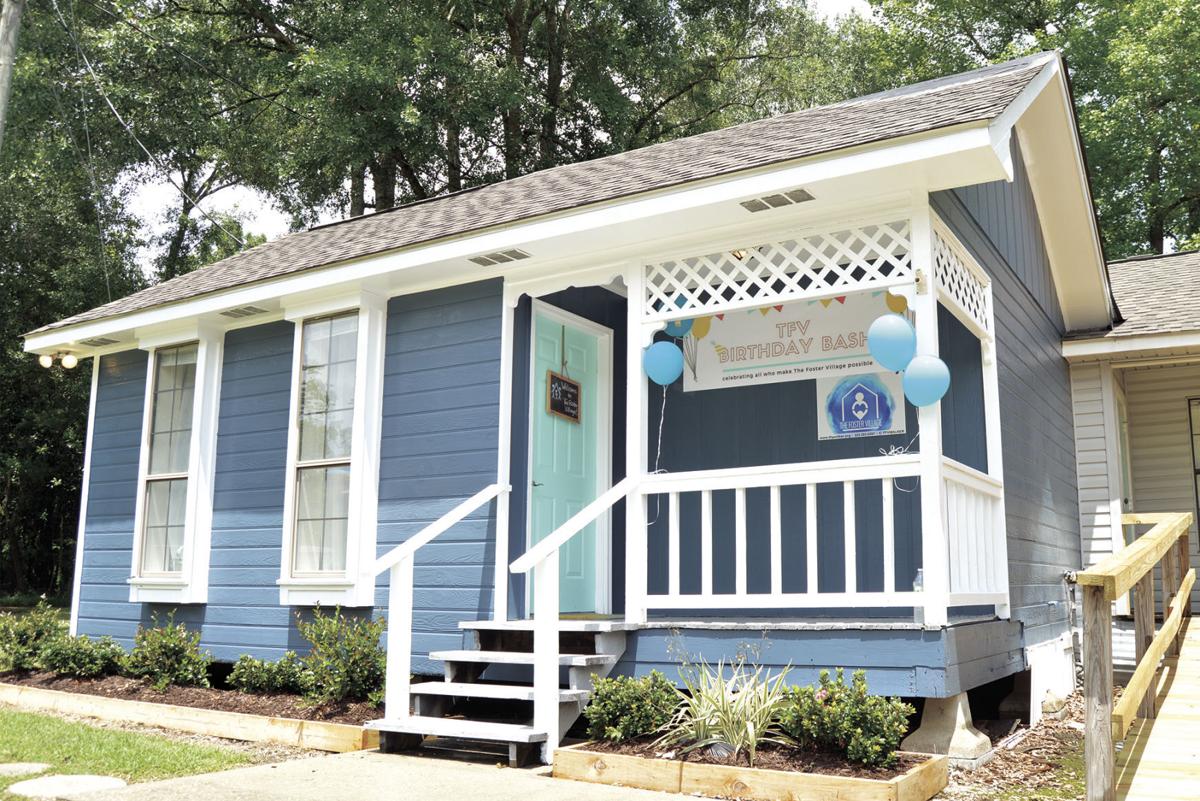 WALKER -- They’ve changed the name, but Shayna Landry and Amy LeJeune have kept their mission the same.

Help the most vulnerable children of Livingston Parish.

The Family Village, formerly known as The Foster Village, was recently named a winner of the “Angels in Adoption” award, which is given to groups or individuals whose contributions in the fields of adoption or foster care have an impact on a national scale.

Since its inception in 1999, the “Angels in Adoption” program has celebrated the efforts of individuals, couples, families, and organizations who advocate for children in need of a family. In the last 22 years, the program has awarded more than 2,700 “Angels” recipients.

The Family Village, barely two years old, is now on that prestigious list.

One of nearly 100 winners from across the country this year — and one of just two in Louisiana — The Family Village was nominated for the award by Congressman Garret Graves, who commended Landry and LeJeune for their work during a recent tour of their facility.

Located on the grounds of Judson Baptist Church in Walker, The Family Village is a donation center for items to equip local children who have been separated from their homes in a traumatic event. The items are provided free of charge to children of all ages, ranging from newborns to teenagers and young adults.

The center is broken up into three main rooms: The living room, which has a resource library, a bible shelf, a donor shelf, and a rack of school supplies; the sorting room, where all donated items are labeled and carefully sifted through for quality; and the fitting room, where children try on the clothes they later take home.

The non-profit organization officially started in the spring of 2018 under Landry and LeJeune, two foster mothers from Livingston Parish who met through Facebook. In 2019, the center served an average of more than one child per day.

Given Livingston Parish’s recent history regarding adoption and foster care, the creation of The Family Village couldn’t have come at a more necessary time, something Graves mentioned in his nomination letter and while he toured the facility.

Last year, the Louisiana Department of Children and Family Services reported that Livingston Parish was leading the state on a per-capita basis in the number of children entering foster care, with that number nearly doubling over the previous four years.

Mental and emotional pain from the August 2016 flood were believed to have triggered the spike, DCFS Secretary Marketa Walkers said at the time, with statistics showing that drugs were the leading culprit.

Graves commended The Family Village’s founders for working to solve “an extraordinary need” in Livingston Parish in his nomination. In the congratulatory letter he sent to Landry and LeJeune, Graves thanked them for helping make “the foster process seamless for families” and added “your hard work does not go unnoticed.”

“Your commitment to the children and families in Livingston Parish speaks volumes about the organization you have created,” Graves wrote.

The reach of The Family Village has greatly expanded since it started as a supply closet for foster families. With each passing day, the co-founders said they quickly realized “there was a larger need in the community” beyond those in foster care.

Landry recalled a conversation with a bus driver who asked if the center had a spare jacket for a boy who wasn’t in foster care but kept entering the bus without something to keep him warm when temperatures dipped near freezing.

Krewe of Denham Springs welcomes food-lovers to cookoff, teams with Texas Roadhouse for $8,000 donation to The Foster Village

Landry’s response: Yes! Does he need anything else?

Chances are, he did.

“If he needs a jacket, he probably needs a lot more than a jacket,” Landry said. “So over time, we’ve just realized that there’s this larger need in the community, and we have more than enough ability and support to help fill that need.”

Now, the center aims “to make sure that every child that has been moved from their home is clothed with dignity and given something of their own since most have lost everything,” according to its website.

Along with those in foster families, the Family Village’s services are available to those not in foster care, including children that are being taken care of by relatives; children that have suddenly lost a parent; children that have lost home to a tragedy like a house fire or flooding; children that have fled because of domestic valence; and referrals from community partners such as teachers, doctors, nurses, bus drivers, first responders, and other “trusted adults.”

With their rebranding, Landry and LeJeune said they want the community to know the center’s services are available to any child in need.

“Any child that’s been through a traumatic or loss, that’s what we’re here for,” LeJeune said. “We want to do everything we can to help them through it. We have everything set up where people can get what they need. The new name will help educate the public on what we’ve evolved into.”

Like everywhere else, things slowed down a bit during the coronavirus pandemic, Landry and LeJeune said. Due to mitigation measures, The Family Village was unable to allow visitors inside and instead were “packing by appointment” and leaving items outside for porch pickup.

But after the state’s recent move to Phase Three of reopening that loosened COVID-19 restrictions, the center recently held its first “shopping time” in months, servicing 22 children over three days.

“And they were all brand new faces,” LeJeune said.

Along with the name-change, Landry and LeJeune are in the process of converting to an electronic system to track the number of people the center helps and what their needs are “so we can better communicate to the community the needs we have.”

Since opening in 2018, everything has been done on paper.

“Trying to keep up with everything that way that was hard,” Landry said with a laugh.

With the electronic system, The Family Village would operate “like a store,” with people coming in and checking out what they need. Each item would be scanned and put into a system so that at the end of the year, Landry and LeJeune could see everything that was given out.

They’re also assigning a value to each item to know how much has been given out.

“This way we can show the public what they’re doing,” LeJeune said. “It’s hard to see that when you’re just dropping something off. This will help people see the bigger picture.”

Though the “Angels in Adoption” award went to The Family Village, Landry and LeJeune stressed that it was “a community award.” The co-founders told Graves the center is “100-percent community funded” and that anytime a need arises, someone will soon show up with it “at the door.”

While standing in the fitting room, Landry waved a hand over the entire inventory of clothes, shoes, crates, accessories, and other items, saying, “The community provided pretty much all of this. Almost nothing was bought.”

“We still haven’t applied for any grants or anything, and we take great pride in that,” Landry said. “It’s amazing that doing this has been purely from community support.”