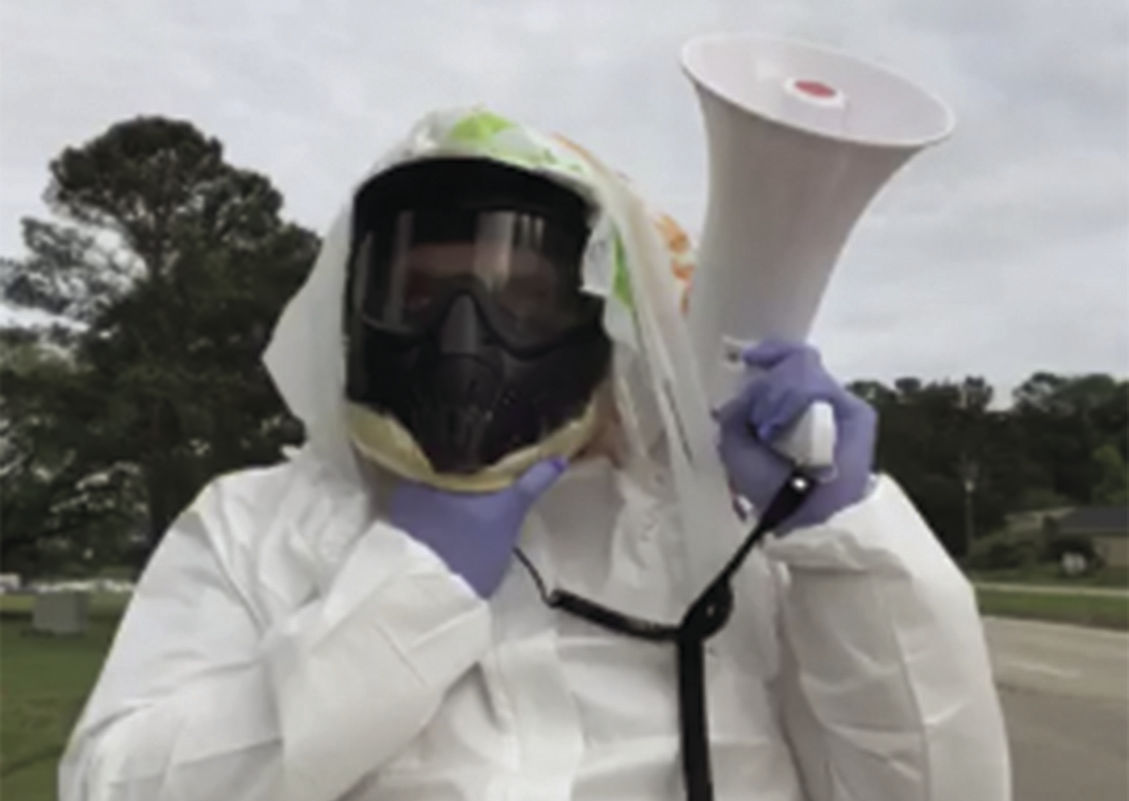 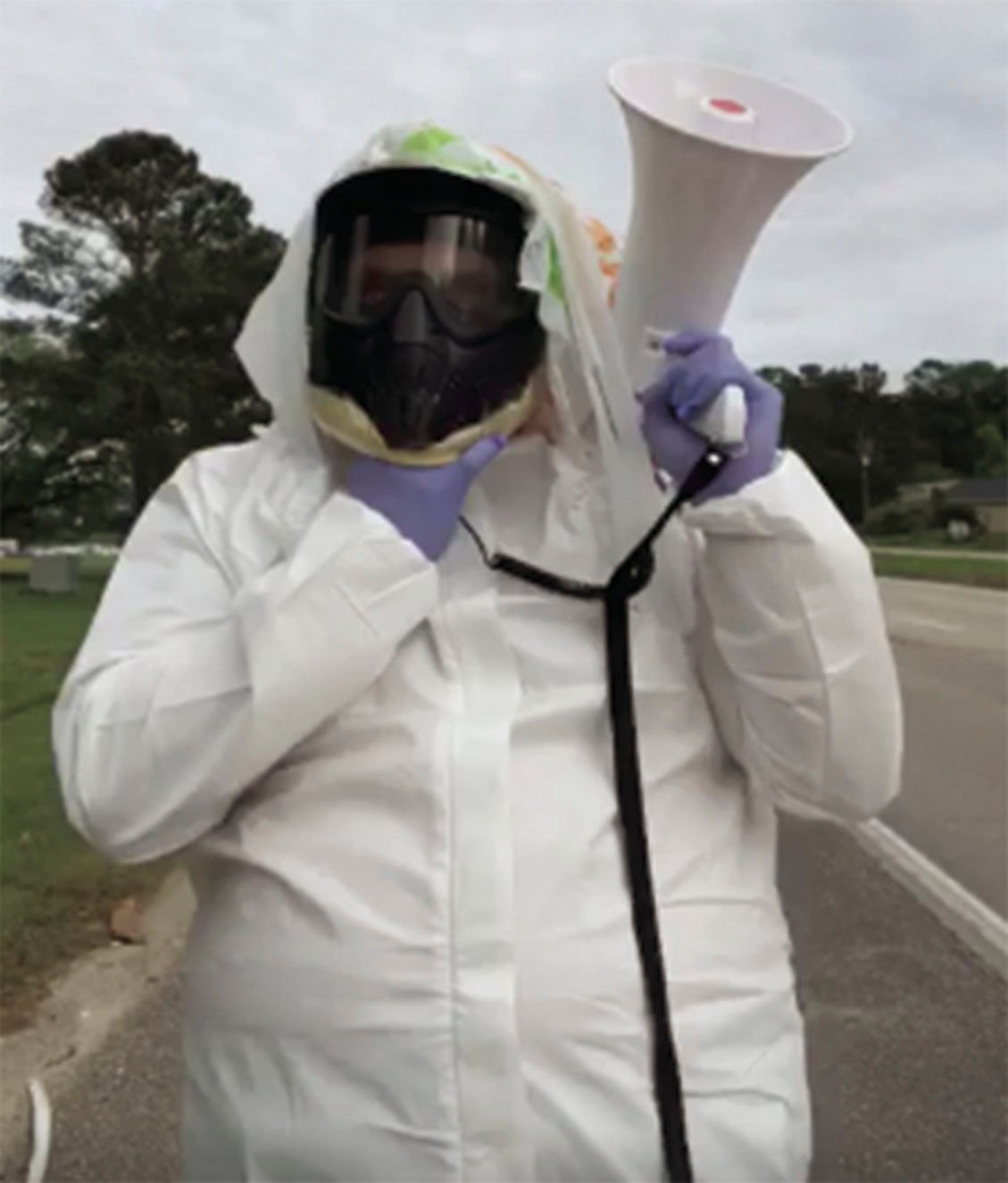 A Watson man spent Sunday morning protesting outside of Life Tabernacle Church, which has received national attention in recent weeks due to its pastor’s continued defiance of state-mandated bans of public gatherings amid the novel coronavirus pandemic.

Lance Woolie, a local comedian who goes by the stage name “Lance Knippers,” said his protest was directed at Rev. Tony Spell, who has repeatedly stated his intention to continue holding service despite Gov. John Bel Edwards’ statewide “stay at home” order in effect through April 12.

The order, among other things, bans public gatherings of 10 people or more. Spell has boasted that his weekend services draw as many as 1,200 people from five parishes to his church in Central. He has told media outlets he believes the pandemic is "politically motivated."

Woolie streamed part of his protest in a 15-minute live video on his personal Facebook page. The video has since been viewed more than 10,000 times and received nearly 300 shares.

Speaking to The News after his protest, Woolie said he wanted to show Spell it is possible “to reach thousands” without putting others in jeopardy of contracting the virus in large public gatherings.

“You have doctors telling you to stay home and slow the spread, and you have a pastor that’s like, ‘Let’s get together and celebrate,’” Woolie told The News. “I understand the role of the church, but I wanted to make an example. I’m just one person in a suit… and I was able to reach thousands of people without having to congregate.”

While Spell was holding service Sunday, the Louisiana Department of Health reported 225 new cases of the novel coronavirus, or COVID-19, bringing the statewide total to 3,540 cases in all but five of the state’s 64 parishes. The statewide death toll reached 151, up by 14 from the previous day.

The dire situation in Louisiana is the reason Woolie said he wanted to “bring awareness” to what Spell is doing in Central.

Woolie said he arrived at the site around 9:30 a.m. and stationed himself “about 600 yards away from the church.” He said he stood on a “government-owned shoulder of the road” and avoided blocking any vehicles or entrances.

During the hour he was there, Woolie recalled counting at least “12 or 13” busses pass him by multiple times, adding that some were going “70 miles per hour.” He also said “the parking lot was full” and that vehicles honked at him as he danced on the side of the street.

“I didn’t want to cause trouble, but I wanted church members to see what they’re walking into,” he said. “I’m hoping I changed a couple of minds.”

“I’m not saying people shouldn’t have church,” he said later. “We can worship remotely. We have capabilities to put the same Bible on your phone. You can broadcast service from your phone. All other pastors are trying to help congregations through technology. Why can’t he?”

Wearing a painter’s jumpsuit, a paintball mask, and a plastic Popeyes bag over his head, Woolie said the point of his protest was to show “what we should be doing right now versus what [Spell is] doing right now.”

Speaking into a megaphone, Woolie said he rattled off the books of the Bible twice to point out what he called Spell’s “hypocrisy.”

“[Spell is] supposed to be a leader,” Woolie said. “I’ve read the Bible three times. I copied the New Testament by hand, literally the whole thing. I’ve led Bible studies. I understand from a pastor’s point of view of tending to your flock. But you must protect your flock.

“It’s kind of greedy. If you want to help the people, you can deliver food and all kinds of things and not risk spreading the virus.”

Woolie’s protest came while Edwards and New Orleans Mayor LaToya Cantrell were doing a walk-through of the Ernest N. Morial Convention Center, which will be used to help coronavirus patients who no longer need to be hospitalized recover.

Speaking to reporters Sunday afternoon in New Orleans, Edwards implored Louisiana citizens to adhere to the mitigation measures that are in place through April 12. He called it “terribly irresponsible” and “selfish” for citizens to do otherwise.

“It is grossly irresponsible for people to flagrantly disregard and violate these social distancing measures that we have in place across the state,” he said. “Right now, we should be focused on stopping the spread of COVID-19 in our communities.”