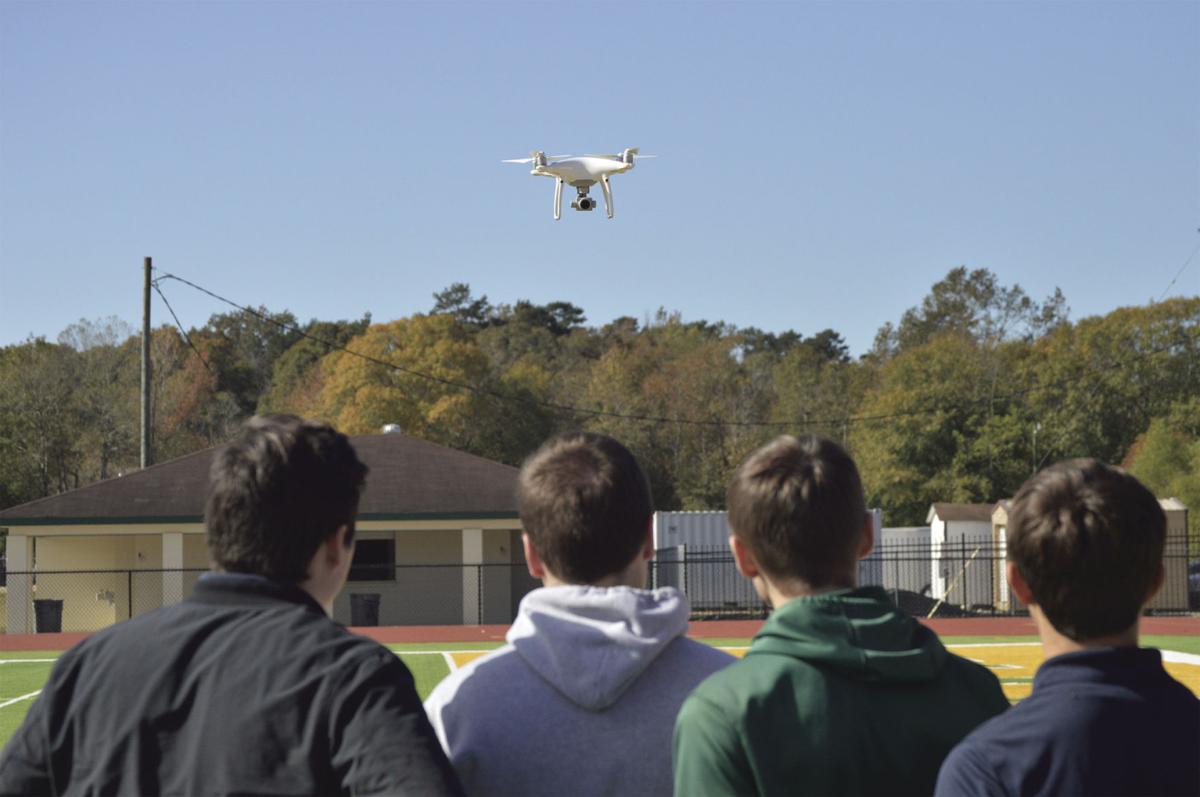 Walker High students watch the flight of their DJI Phantom 4 Advanced drone during their drone class on Tuesday, Nov. 28. 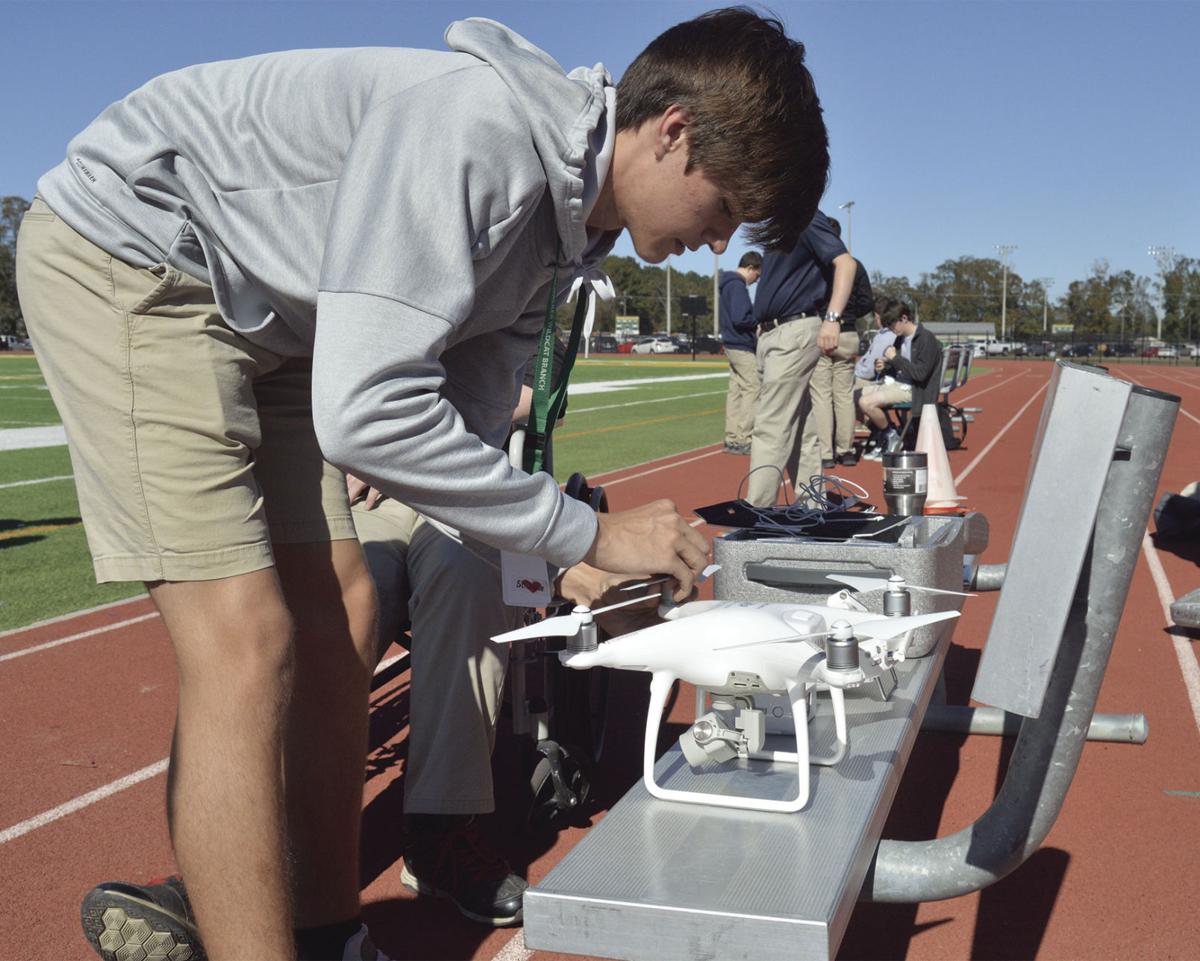 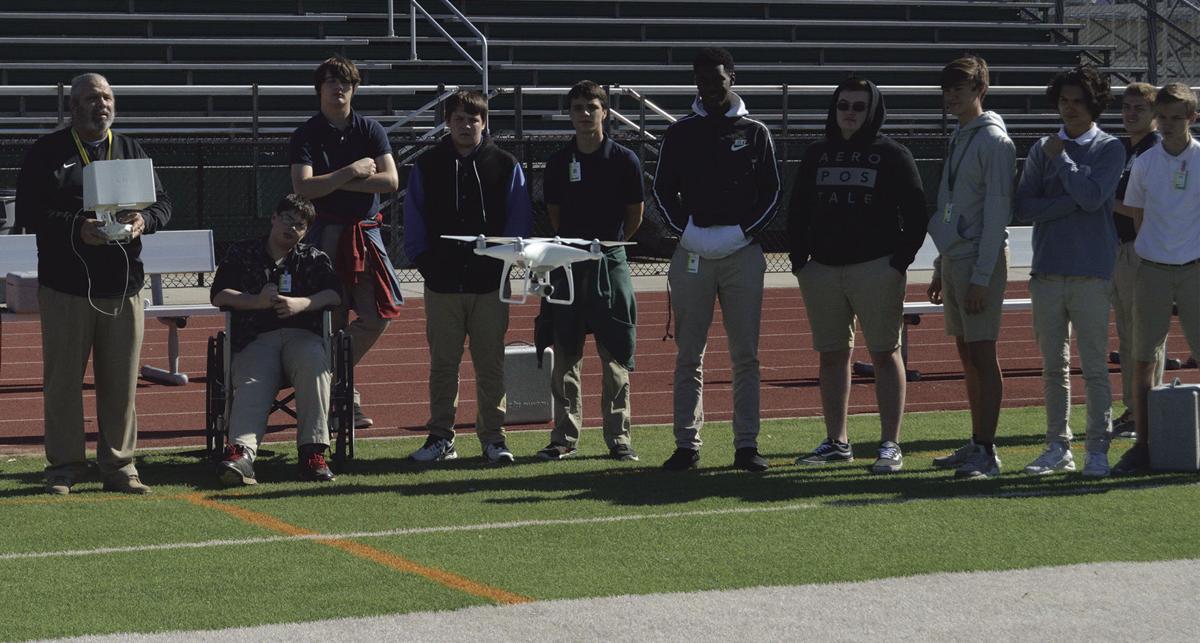 Walker High instructor Steve Johnson, far left, spent two weeks in Alaska this summer getting certified to teach the school’s new drone course. Here he is demonstrating how to fly a drone. 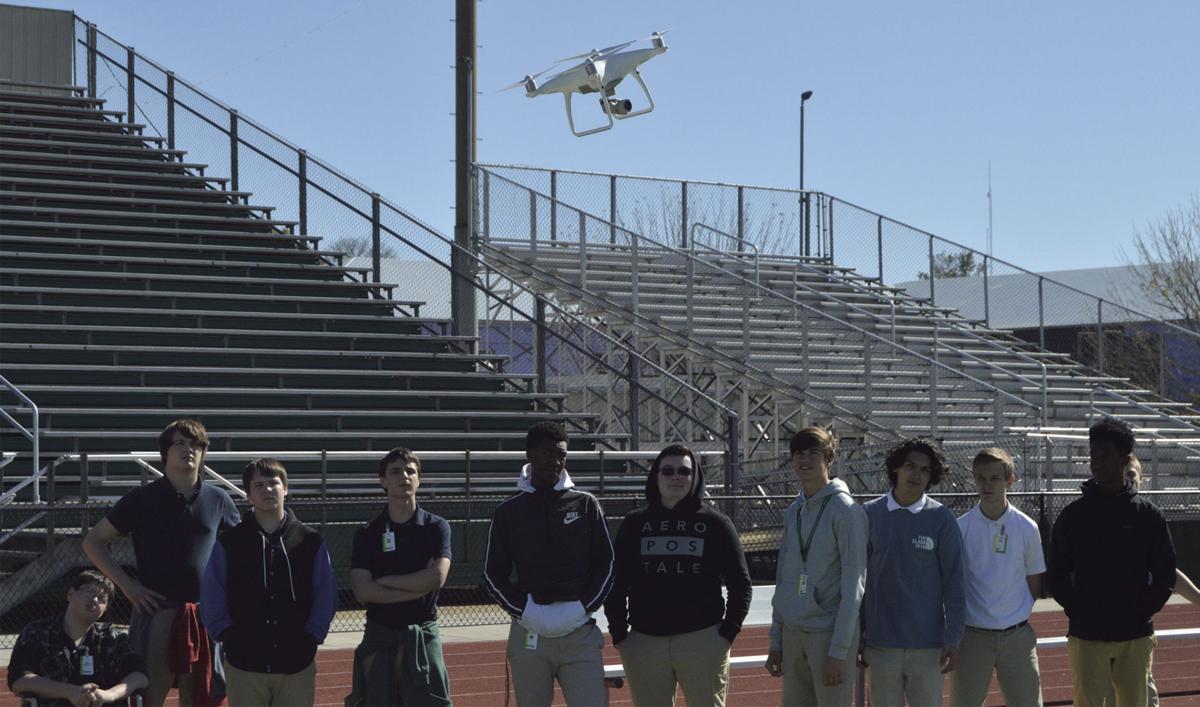 Walker High students follow the flight of a drone during class on Tuesday, Nov. 28. 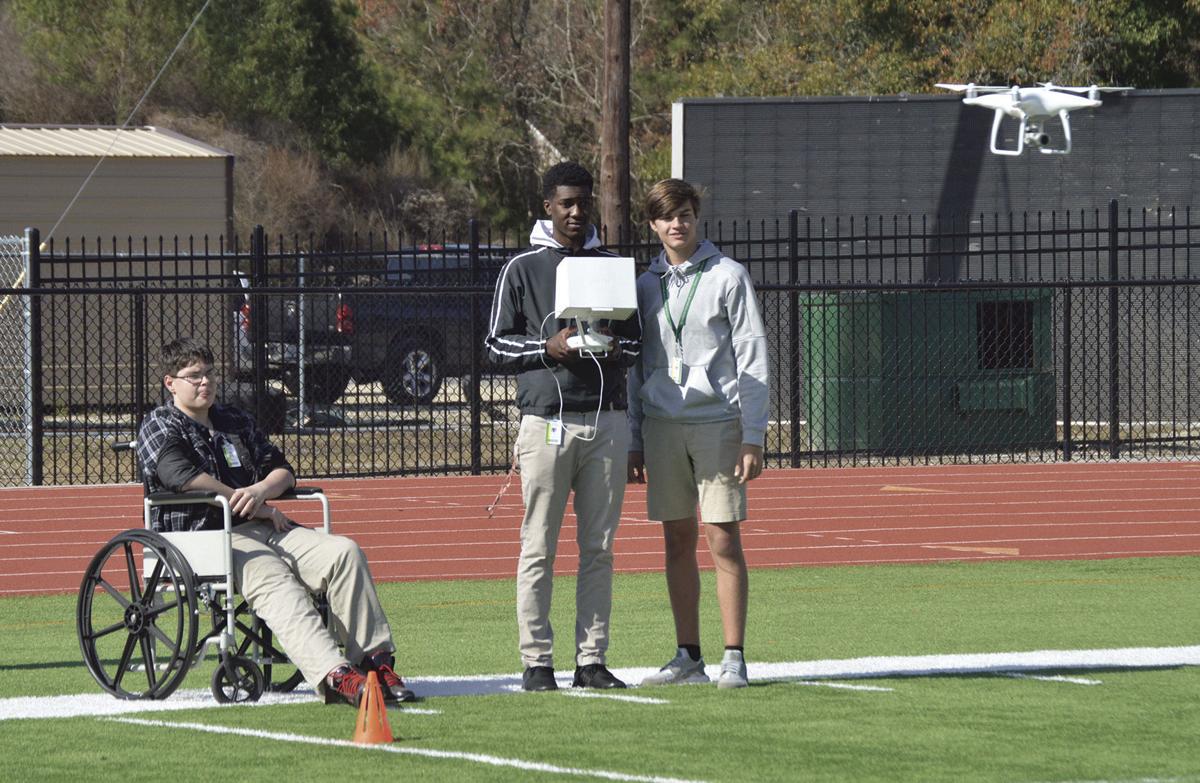 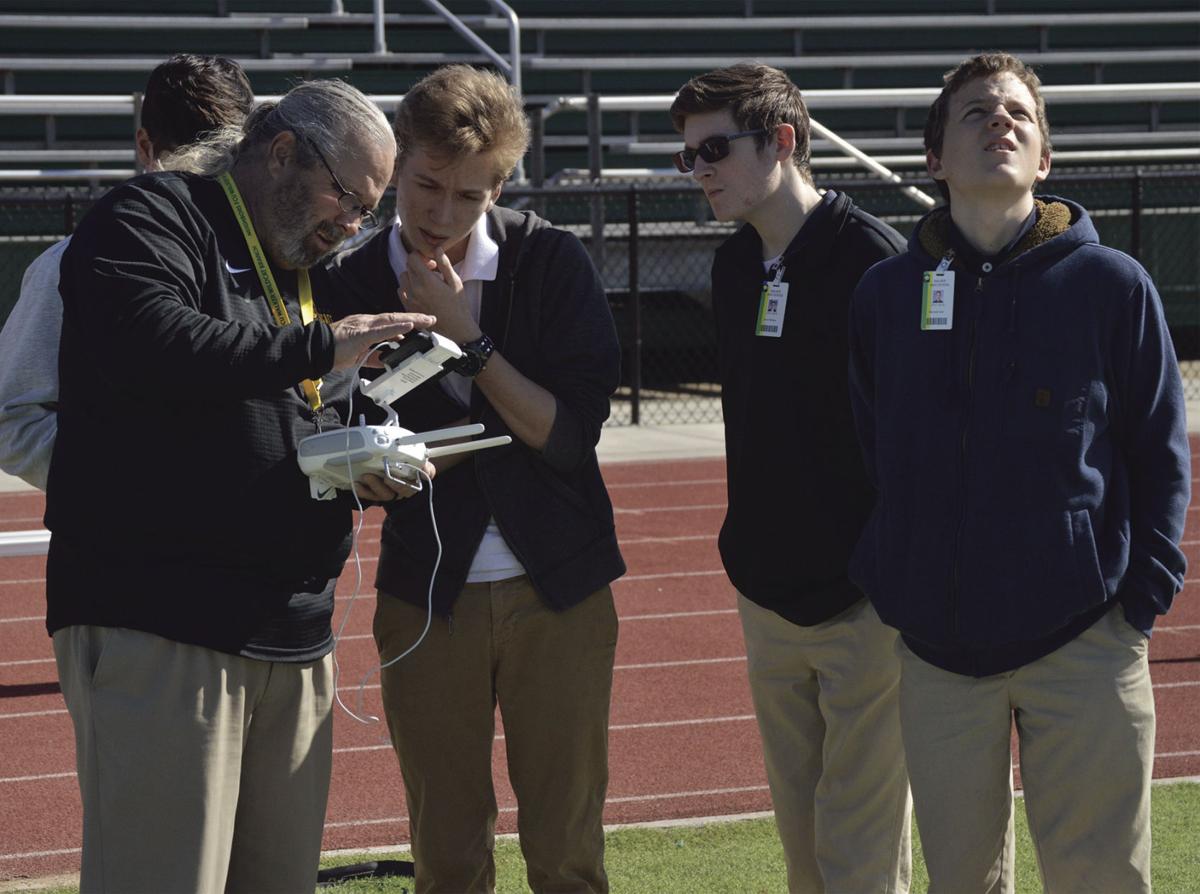 From left, instructor Steve Johnson, Gabriel Votaw and Trevor Belleau looked at an aerial view of the drone on a smartphone while Marshall East looks at the drone in the sky.

Walker High students watch the flight of their DJI Phantom 4 Advanced drone during their drone class on Tuesday, Nov. 28.

Walker High instructor Steve Johnson, far left, spent two weeks in Alaska this summer getting certified to teach the school’s new drone course. Here he is demonstrating how to fly a drone.

Walker High students follow the flight of a drone during class on Tuesday, Nov. 28.

From left, instructor Steve Johnson, Gabriel Votaw and Trevor Belleau looked at an aerial view of the drone on a smartphone while Marshall East looks at the drone in the sky.

WALKER -- Mason St. Pierre took the drone out of the box, set it on a bleacher and got right to work.

He started with the propellers, attaching all four on the white DJI Phantom 4 Advanced drone, one of five that Walker High purchased this year.

After downloading the DJI GO 4 app, which gave the controller an aerial look from the drone’s point of view, the 11th grader connected a tablet to the drone’s control pad, a separate contraption that worked with the tablet to control and monitor the drone’s flight.

Once Walker High instructor Steve Johnson wrapped up his quick demonstration on how to fly the drones, St. Pierre carried his to the far corner of the football field to test one out himself.

Using two joysticks to control the drone’s every move, St. Pierre sent his Phantom 4, which has a wireless range of 22,704 feet, sky high above Wildcat Stadium, making it go up and down and side to side before landing it softly a few feet from where he stood.

St. Pierre then handed the controller to fellow junior Trent Montgomery, who had walked up while the drone was in flight, for his own test run. Seconds later, both WHS students were squinting up at the clear blue sky, laughing as the drone spun in place before Montgomery landed it and gave the control to the next eager student.

“Better than sitting in a classroom,” St. Pierre joked.

Walker High Principal Jason St. Pierre agrees with that assessment, which is why he was so adamant on implementing the program — perhaps the first of its kind in the state — into the curriculum this school year.

Walker High’s new Drone Certification Program — or “Drones 101” as Johnson called it — is a program designed to prepare students to receive their Federal Aviation Administration (FAA) Pilot’s 107 License, a license to fly drones commercially and professionally.

In the class, which is taught daily at 11:15 a.m. to WHS students and on Tuesday and Thursday nights to people from across the parish, students learn “the rules of the road,” most notably drone safety, how to fly drones, and where to fly them.

After completing the year-long course, students will be able to take the Part 107 Commercial Drone License Exam, which requires at least a 70 percent for a passing score.

But Johnson, who spent two weeks in Alaska this summer getting certified to teach the course, said his final — which requires an 80 percent to pass — should prepare the students nicely for their Part 107 exam.

“I had been teaching law studies and world history before, but this gave me a renewed vigor for teaching,” Johnson said. “I’ve taught a lot of different things over the years, but the drone thing is something else.

“It’s an industry that we’re at the edge of, so to see these kids have an opportunity to jump in and get a foot in the door before drones really blow up the way they’re going to eventually blow up is exciting.”

Principal St. Pierre first learned of the program at the Association for Career and Technical Education (ACTE) Convention in Las Vegas last November, when representatives from Advanced Aerial Education, based in Alaska, were offering information on drones.

After “seeing the drones and what they could do,” St. Pierre broached Staci Polozola, Career and Technical Education Coordinator for the Livingston Parish School System, with the idea.

Polozola, whose role includes management of all the funds for career and technical education. didn’t need much convincing.

“We’re always looking for job opportunities that we can begin training students on before they leave us,” she said, “and we want that training to be accountable in that the student actually acquires some kind of credential, and we want that credential to be something relevant.

“We want to train students for the jobs of tomorrow.”

Principal St. Pierre, in his 10th year at Walker High, has always made that a top priority.

With St. Pierre at the head, the school has added training courses in electrical, carpentry, welding, culinary, agricultural and sports medicine fields, not to mention a television studio, an underwater robotics class, an apparel store and Neighbors Federal Credit Union.

But that’s not all in store for Walker students: New programs will follow them to the other side of campus once construction on five new buildings is wrapped up in August of 2018.

“My goal was and is to marry academics and vocational education on the same campus,” St. Pierre said after mentioning the school’s 12 AP classes and several dual-enrollment classes. “This is the fiber of our school. It goes back to our school motto, where opportunity today equals success tomorrow: We’re here to service all kids because this is where schools are going.

“Kids have access to much more information now, so why waste their time for four years just handing out worksheets?”

With aid from Polozola, the school spent “$15,000-20,000” getting the drone program started. Included in the costs were instructor training and the purchase of five DJI Phantom 4 Advanced drones, a pair of Inspire 1 V2.0 drones, 10 smaller practice drones and tablets.

But Polozola thinks they came out ahead in this transaction.

“That actually isn’t a lot of money when you think about what we’re going to be able to offer to the students long term,” said Polozola, who also partnered with Northshore Technical Community College to get the program up and running. “It’s a good turn on investment for us.”

Principal St. Pierre said this is the only high school in the state he knows of that has a drone program, though he heard of one Tennessee and another in Florida last year.

Next year, St. Pierre said the school will open a new building called the drone academy — nicknamed the “Quadcopter” — to push the program even further by teaching drone repair, maintenance and design.

Students will print the drone using a 3D printer, assemble it, and take it out to fly while also learning to sell and service the drones.

St. Pierre and Johnson will share all this information and more when they present during the ACTE Convention next week in Nashville, Tennessee, the same event where St. Pierre first learned of the drone program.

A lot sure has changed since last year.

“We took off, pardon the pun,” St. Pierre quipped. “It’s been non stop. In a year, we got a teacher certified and have our students into it, and next year we’ll have our own Quadcopter dealership and repair center.

“It all goes back to where opportunity today equals success tomorrow. We’re extremely excited and proud, and our kids are the beneficiaries of it.”