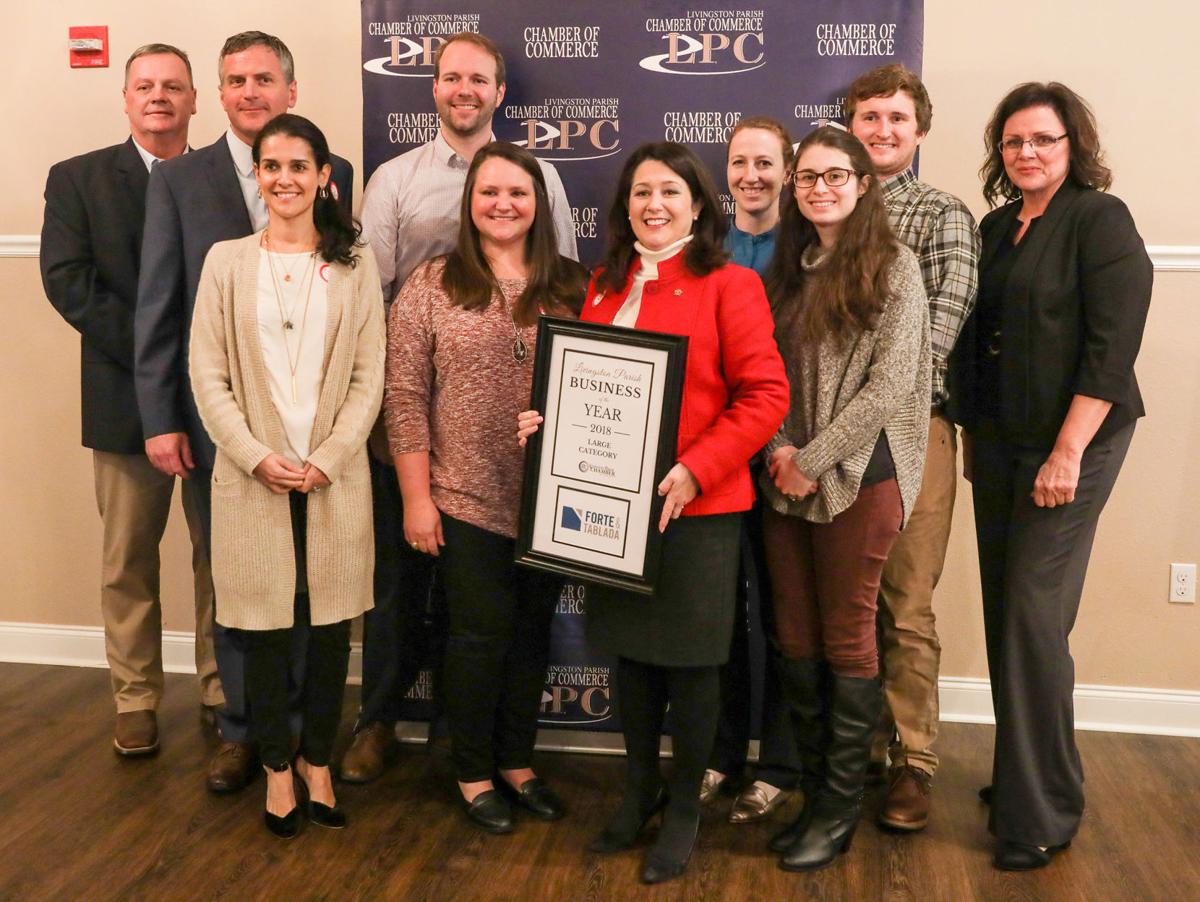 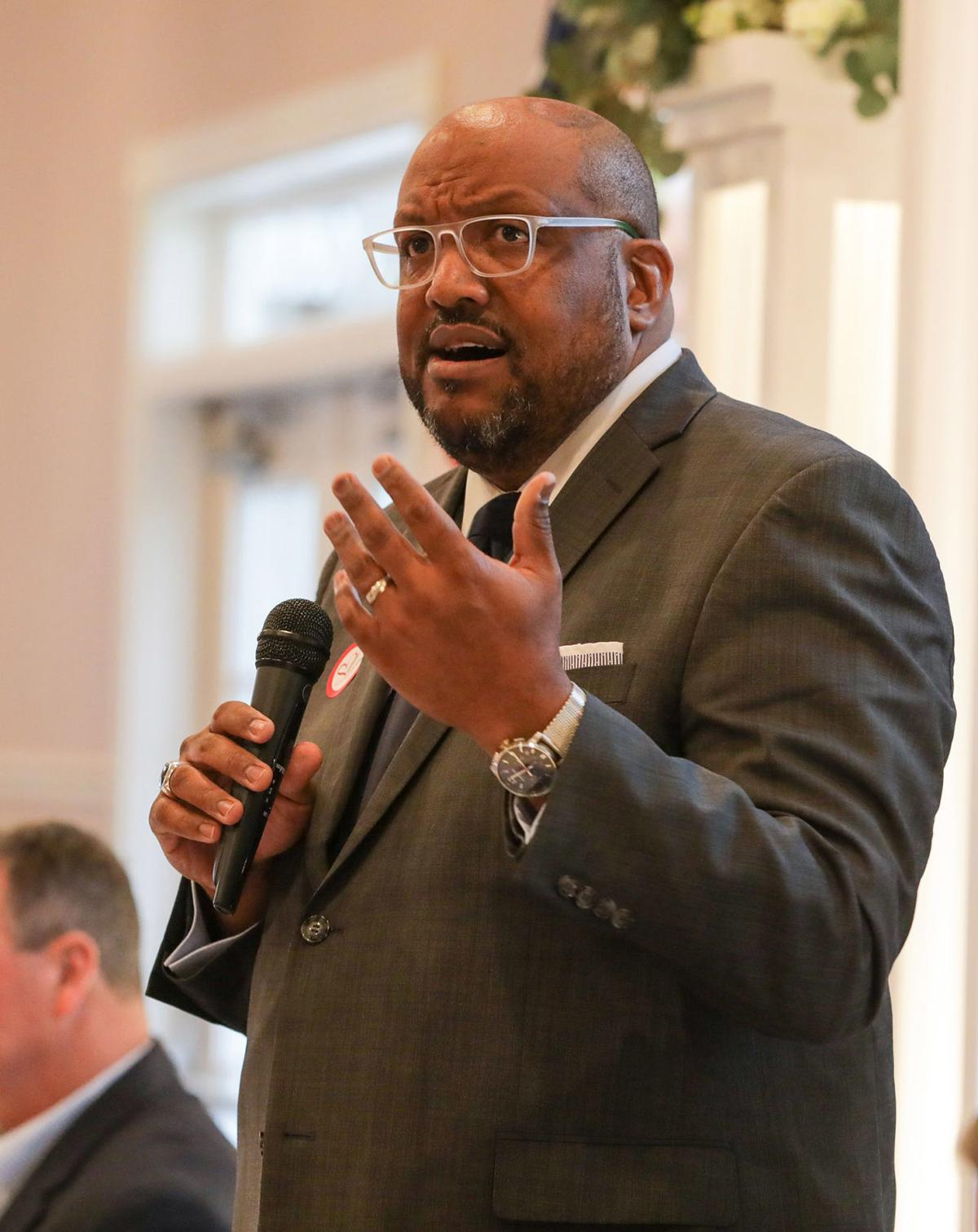 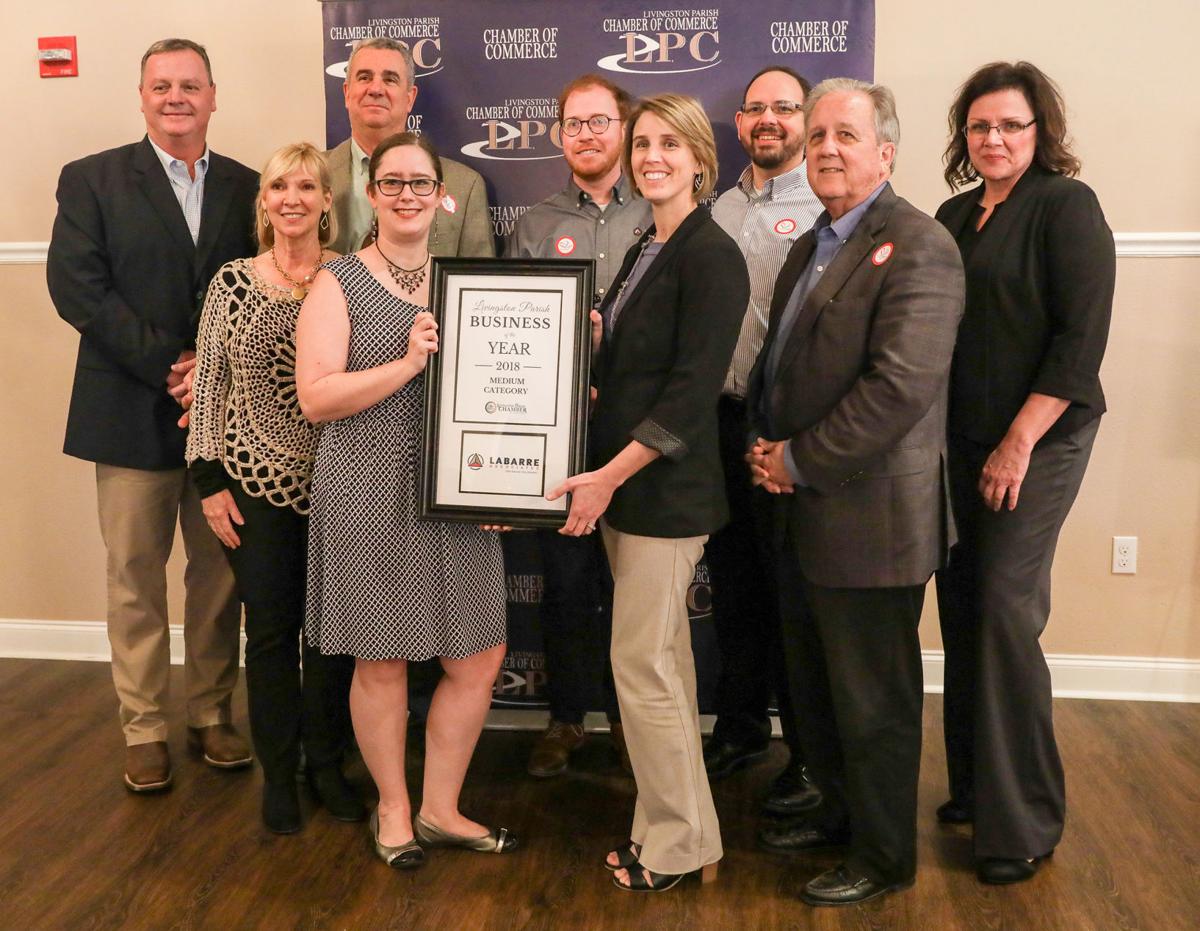 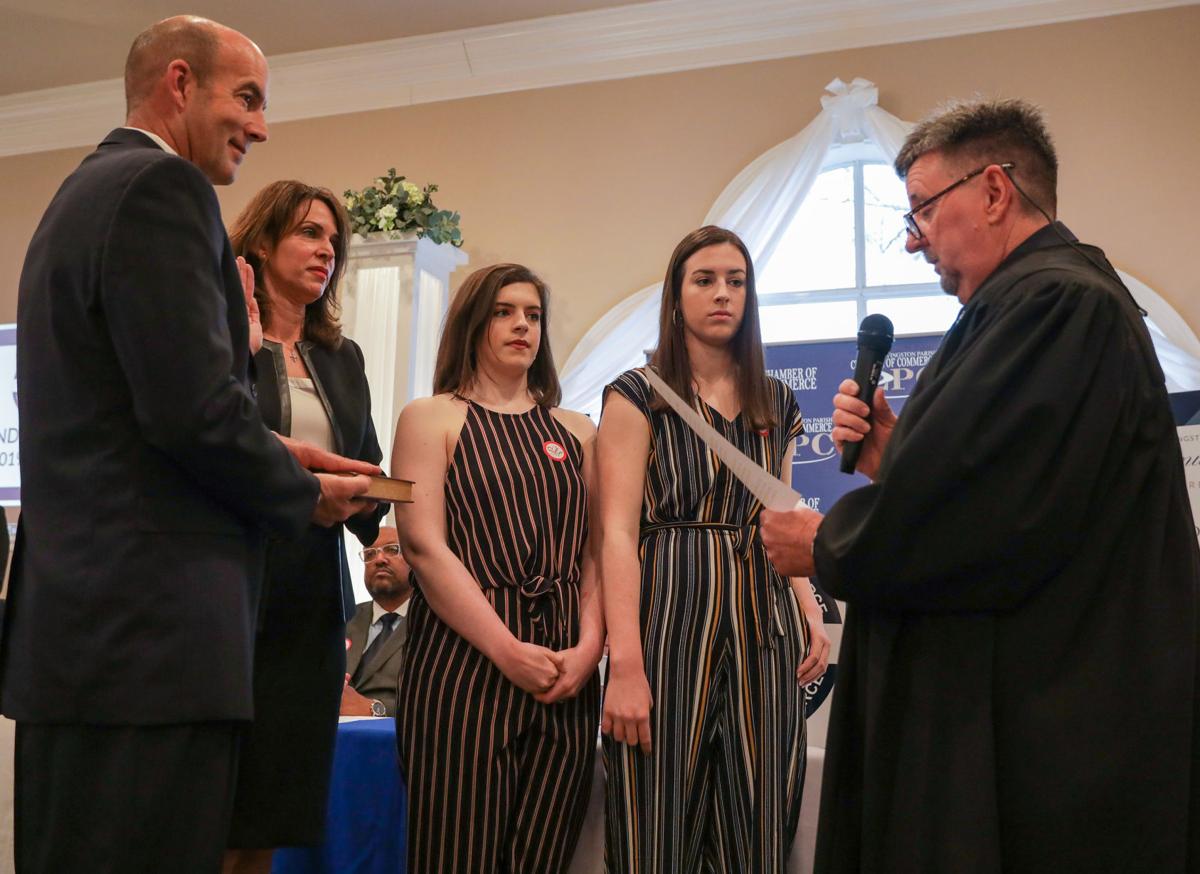 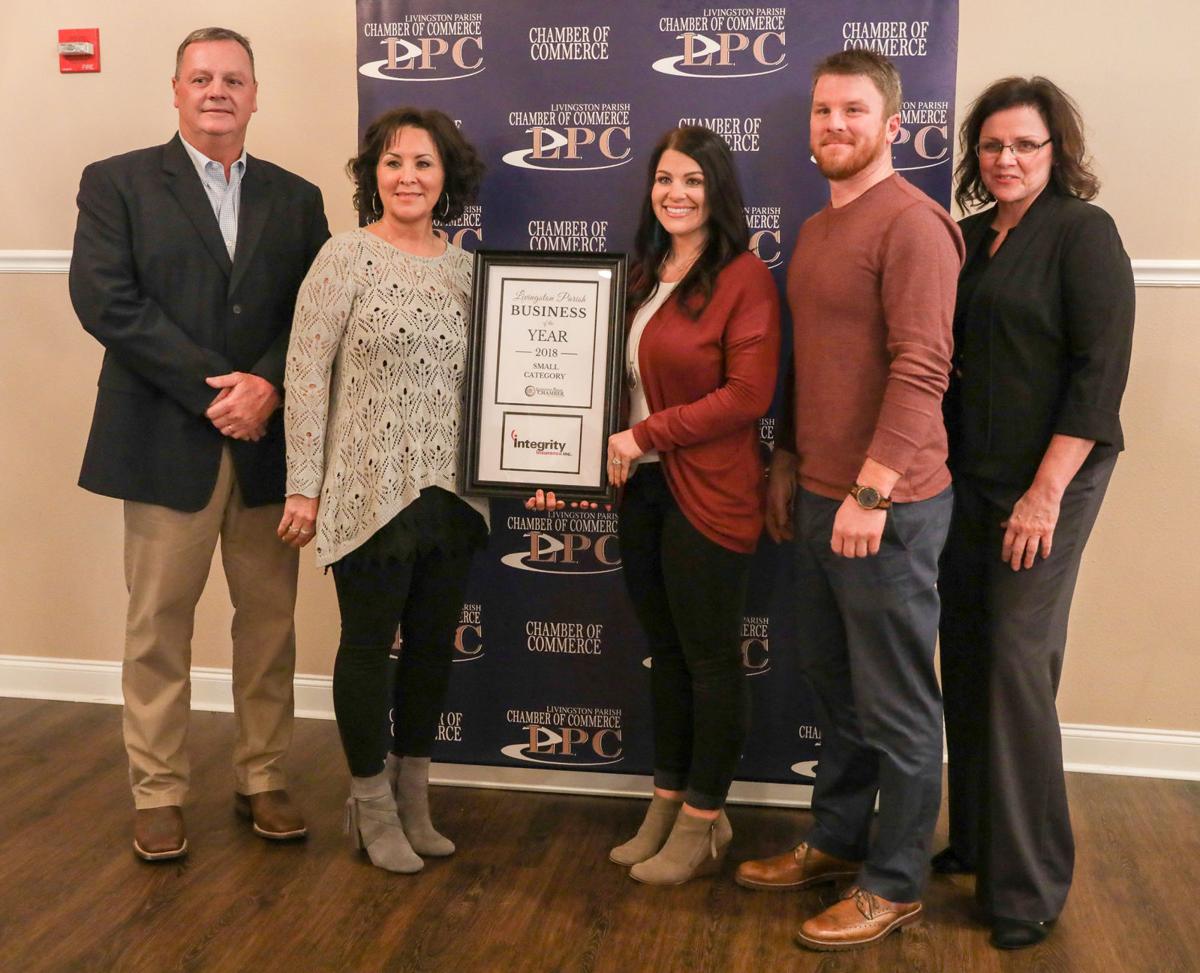 DENHAM SPRINGS – As a business speaker, the CEO/president of CC’s Coffee House said he has a number of speeches for any occasion.

But when Celton Hayden Jr. agreed to speak at the Livingston Parish Chamber of Commerce Annual Meeting & Awards Banquet, he spoke as a parish resident who has seen what his neighbors have endured in the 2016 flood.

How his neighbors and those who run businesses have endured mirrors the four “threads” that have followed him in his personal and professional life, he said Wednesday.

“We share this in common, in our stitched community, a patchwork of Livingston Parish businesses and community as a whole.”

“I stand here not as a CEO, not as a business leader, but a guy with an idea, a husband trying to be better and a father learning the role day by day,” said the Denham Springs resident.

The highlight of the meeting was recognizing the top businesses in three divisions for their commercial success and contributions in the community. They were:

“We are so honored to be receiving this award particularly because one of our clients was the one who nominated us for it,” said Ann Forte Trappey, president of Forte & Tablada.

“The fact that our clients love what we do is truly exciting,” she said of the consulting engineering and land surveying firm.

LaBarre Associates began 34 years ago and “in those 34 years we were able to build a great, great group of people that make our organization successful,” said Jay Labarre, president of the firm that offers architecture, construction, and real estate services.

“They mentioned a number of things that we participate in, and those are things our employees participate in and make the company good,” he said. “I was very surprised that we were named for this award but very gratified. The group of people who work for and around us deserved this award.”

Other awards presented by the Chamber included:

• Associate of the Year: City of Walker.

John Blount also turned over his gavel to Candy Forbes, president of Denham Springs Housing, who succeeds him as chairman of the board of directors.

“I waited later in my business life to get involved,” with the Chamber, Blount said. He urged the younger members of the Chamber present to “step out there. Do yourself a favor and get out there,” and serve their community.

“The Chamber is a perfect place to start,” he said.

“Each year I get a new boss and new partner,” said April Wehrs, CEO/president of the Chamber.

“It’s important to know how strong our leadership is here in Livingston Parish,” she said.

For Hayden, bringing a CC's Coffee House to his hometown took a while to accomplish. Hayden went from a store manager in 2001 to becoming CEO/president of CC’s Coffee House in 2014.

He briefly went over his biography, from setting his sights on the Baton Rouge market in 2004 to moving to Denham Springs in 2006 and wanting to open a shop in his hometown, which was delayed by the Great Flood of 2016. He thanked Jay LaBarre “for saving my life” with his help getting the South Range Avenue coffee shop completed and opened in 2018.

“I looked back at my history and see four distinctive threads that led to success in my own personal history and CC’s,” Hayden said, “But I think they apply to everyone in this room."

“The dictionary defines purpose as a reason something is done or created. You people have redefined purpose with good works,” he said.

“Power is the ability to do something or act,” Hayden said. “Each and every one of you showed the power is having the strength and courage to make decisions in the face of long odds.

“Pride is the feeling of deep pleasure and satisfaction. It is women and men who love what they do and those who they do it with.

“Perseverance is being steadfast in doing something despite the difficulty,” Hayden said. “I argue this community continues to show the entire world that pride is the faith to continue your work when others fall from your side.”

Hayden also touched on restaurants “who nourish our bodies and minds, who work 24 hours a day so our 5, 10 or 30 minutes over a great meal will sustain us.”

“I am reminded of the noble men and women in this community who elevate businesses for our personal care, so you can walk out of those doors with a pep in your step,” he said.

“Other industries and businesses are represented here today, some time-honored and some just emerging, who are important to the men, women and children of our shared community, of which I am one,” he said.

Jeremy Theriot, public affairs manager for Cox Communications in Baton Rouge, the sponsoring business of the event, thanked his fellow Chamber members for coming out. Theriot said Cox is launching a new brand with a new logo in an effort to keep its customers connected and “give meaning to your connections.”

Cox also gave its employees 16 hours of paid time to serve in the community with nonprofit groups, and through its employee donation plan has distributed $463,000 to schools and nonprofits in its service area.

Check out these Livingston Parish headlines from January 24, 2019!

Mary Ann Delaroderie Rhodus passed away peacefully at home on …