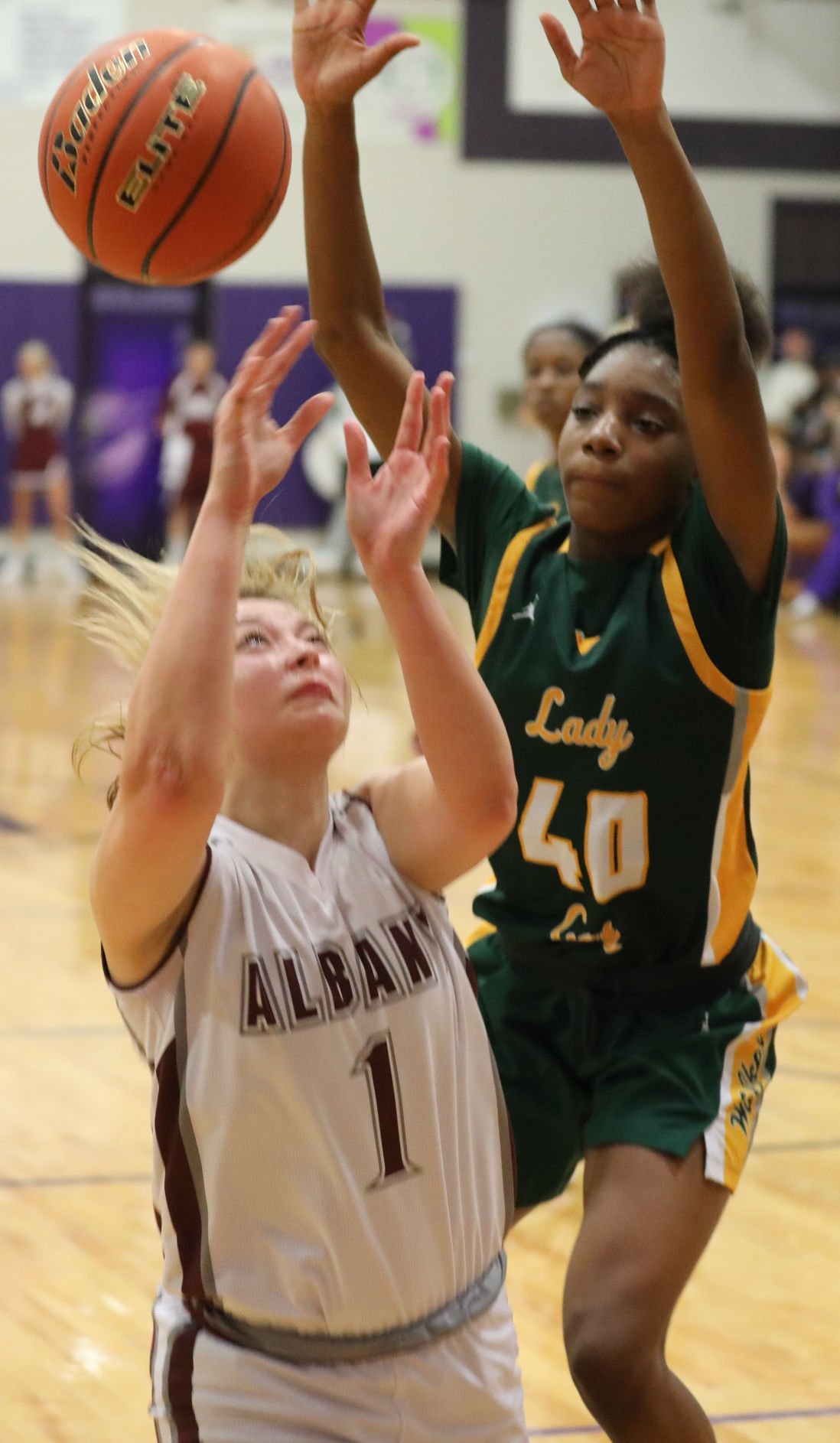 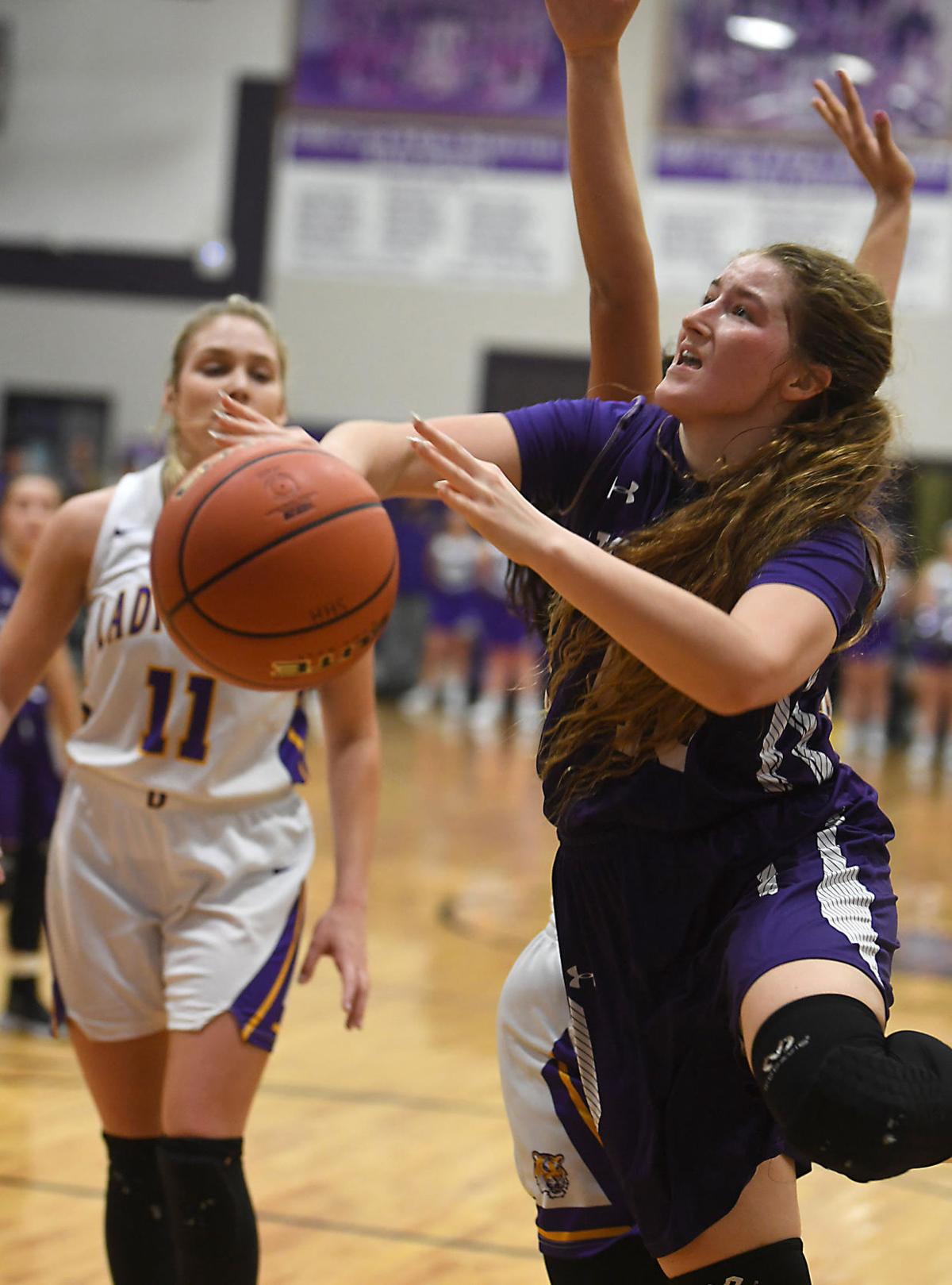 Holden’s Jaycee Hughes (40) passes the ball under the basket in the first half of Doyle's 79-49 win over Holden Friday in the Livingston Parish Basketball Tournament in Holden.

Holden’s Jaycee Hughes (40) passes the ball under the basket in the first half of Doyle's 79-49 win over Holden Friday in the Livingston Parish Basketball Tournament in Holden.

ALBANY – Over the past couple of seasons, the Albany-Holden girls basketball showdown has served as sort of a catalyst for both teams heading into the start of their respective districts.

If Friday’s meeting between the teams is any indication, things could be on the upswing for both teams over the final months of the season.

Kellie Landry scored seven of her 20 points in the second overtime, helping Albany to a 64-62 victory over Holden at Albany High.

“Any time it’s Holden versus Albany, this is what you get,” Albany coach Stacy Darouse said after her team moved to 15-7. “It was a little more than what we bargained for, but I’m sure it was fun for the fans. We start district on Tuesday, so this is a great win going into district.”

Holden coach Pam Forbes would have liked to have picked up the win, but she couldn’t fault her team’s effort.

“I really felt good about the game all the way to the very end,” she said after the Lady Rockets dropped to 7-12. “I thought we got the shots we wanted – just a very few shots that you consider bad shots, and maybe in the second half, I don’t know that we took a bad shot. I thought that the kids fought hard. We’ve gotten over the process of injuries and things happening on our team. We’ve gotten a lot of kids playing time, and I felt like that showed because we played the last few minutes of overtime with four freshmen and a junior that didn’t have a lot of playing time before mid-December. We’re going to take this and we’re going to run with it.”

The teams headed into the second overtime tied at 53-53 after Albany’s Brooke Saxon missed a pair of free throws with 2.3 seconds left in the first overtime.

Holden’s Allie Smith scored the first basket of the second extra session before Landry completed a three-point play, and the Lady Hornets converted a pair of steals into points, the second of which was a steal and layup by Landry, which put Albany ahead 60-55.

“Holden’s always a big rival, so this win definitely something we’re proud of,” Landry said of the win.

The Lady Rockets’ Jaycee Hughes, who finished with 25 points, scored four straight, capped by a pair of free throws with 1:54 left that cut the lead to 60-59

Albany answered with a pair of free throws by Haley Meyers and a basket by Landry following a Holden turnover made the score 64-59. The Lady Hornets missed a chance to pad the lead when Saxon and Laila McAllister combined to go 0-for-4 at the line, setting up a 3-pointer by Holden’s Brooke Foster for the final margin.

Holden got a steal under the basket on the inbounds pass and Albany blocked a pair of shots before the final buzzer.

“At the end of the day, we don’t have anything to be ashamed of,” Forbes said. “We fought to the very last second. Albany is a very good basketball team. Stacy’s had to make a lot of adjustments this year, and she’s done a great job with them. Kellie plays the game of her life, but I felt like we were trying to turn them over, and at key points in the game when we needed them to turnover, they didn’t, so that shows their maturity as they go into district.”

“The entire game, we told them to attack,” Darouse said. “We told them (Thursday at practice) to attack, and I felt like we needed to take that three in case we missed it, we could get an offensive board and put it back up, and Maddie’s best when she’s not thinking. The one thing she thought about was getting behind the line, and she did that, and bank it in or not, it went in and kept us in the game.”

After a Holden turnover, Oubre missed a shot, and the Lady Hornets lost the ball on the baseline when a pass by Meyers kicked off the toe of Cassie Baygents out of bounds. Holden threw up a shot that was well short at the buzzer, sending the game into overtime.

Saxon was fouled but missed both free throws with 2.3 seconds left, setting up the second overtime.

“This is the first time Brooke’s had to be in that position, so it was a learning experience for her,” Darouse said. “It was a learning experience for our team, because it’s not the last time that Brooke’s going to be in that position, because we want the ball in her and Haley’s hands and Maddie’s hands, so it’s not something that is going to be a one-time thing for her, so we’ve got to look at it and talk about some things mentally and see if we can’t get if fixed.”

Albany led 42-33 heading into the fourth quarter and 44-33 after a Landry basket, but Holden found a comfort zone in its half-court offense, enabling the Lady Rockets to chip away at the lead by capitalizing on Albany turnovers.

Holden’s Emma Hutchinson and Cambree Courtney did the damage, combining to score 12 points in a 13-0 run that gave Holden a 46-44 lead on Hutchinson’s basket.

Courtney finished with 13 points in her first game back since suffering an injury in the parish tournament, while Hutchinson added 10, eight of which came in the fourth quarter before she fouled out.

Meyers, who finished with 19 points, then hit a pair of free throws to cut the lead to two before Hughes’ free throw set up the end of regulation.

“I really thought we were going to win the ball game,” Forbes said. “I really did. I felt like we had the mentality to win it. We just had some things happen right at the end, and we didn’t do very well.”

Holden led 20-15 at the end of the first quarter after Hughes hit a 3-pointer at the buzzer, but the Lady Hornets capitalized on turnovers to start the second quarter, keying a 7-0 burst capped by a pair of Saxon free throws for a 27-15 lead with 6:07 to go in the first half.

Albany led 32-25 at halftime after Hughes’ putback at the buzzer.

“We were standing,” Darouse said of Holden’s baskets at the buzzer to end both quarters in the first half. “Good teams make you pay, and they made us pay for that, and it caused them to get some momentum, and any time the other team has momentum, it’s not good for us, so we always want to keep that pedal to the metal, and we’re doing this – it’s up and down. I think early in the year, Pam (Forbes) said we’re not just quarter-to-quarter and game-to-game, we’re play-to-play, and I feel like we’re very similar.”